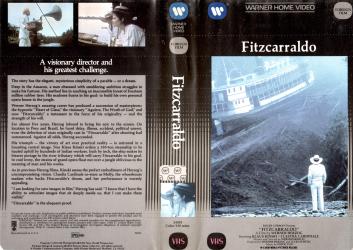 Additional Information
German filmmaker Werner Herzog has never done anything by halves. When Herzog tackled Fitzcarraldo, the story of an obsessed impresario (Klaus Kinski) whose foremost desire in life is to bring both Enrico Caruso and an opera house to the deepest jungles of South America, the director boldly embarked on the same journey, disdaining studios, process shots, and special effects throughout. The highlight of the story is Fizcarraldo's Herculean effort to haul a 300-plus ton steamship over the mountains. No trickery was used in filming this grueling sequence, and stories still persist of disgruntled South American film technicians awaiting the opportunity to strangle Herzog if he ever sets foot on their land again. In the end, Herzog proved to be as driven and single-purposed as his protagonist, and it is the audience's knowledge of this that adds to the excitement of Fitzcarraldo.


The story was inspired by the real life Peruvian rubber baron Carlos Fermín Fitzcarrald; in the 1890s, Fitzcarrald did bring a steamship across an isthmus from one river into another, but it weighed only 30 tons (rather than over 300), and was carried over in pieces to be reassembled at its destination.[2][3]
In his autobiographical film Portrait Werner Herzog, Herzog has stated that the film's spectacular production was partly inspired by the engineering feats of ancient standing stones. The film production was an incredible ordeal, and famously involved moving a 320-ton steamship over a hill without the use of special effects. Herzog believed that no one had ever performed a similar feat in history, and likely never will again, calling himself "Conquistador of the Useless".[4] Three similar-looking ships were bought for the production and used in different scenes and locations, including scenes that were shot aboard the ship while it crashed through rapids, injuring three of the six people involved in the filming.
Casting of the film was also quite difficult. Jason Robards was originally cast in the title role, but he became ill with dysentery during early filming and, after leaving for treatment, was forbidden by his doctors to return. Herzog then considered casting Jack Nicholson, and even playing Fitzcarraldo himself, before Klaus Kinski accepted the role. By that point, forty percent of shooting with Robards was complete, and for continuity Herzog was forced to begin a total reshoot with Kinski. Mick Jagger was originally cast as Fitzcarraldo's assistant Wilbur, but due to the delays his shooting schedule expired and he departed to tour with the Rolling Stones. Herzog dropped Jagger's character from the script altogether and reshot the film from the beginning.
Klaus Kinski himself was a major source of tension, as he fought virulently with Herzog and other members of the crew; a scene from the documentary My Best Fiend depicts Kinski raging at production manager Walter Saxer over trivial matters, such as the quality of the food. Herzog notes that the native extras, contrary to Kinski's feeling of closeness to them, were greatly upset by his shows of anger. In My Best Fiend, Herzog says that one of the native chiefs offered, in all seriousness, to murder Kinski for him, but that he declined because he needed Kinski to complete filming. In one scene, when the crew is eating dinner while surrounded by the natives, the clamor the chief incites over Fitzcarraldo was, according to Herzog, his exploiting their hate of Kinski.