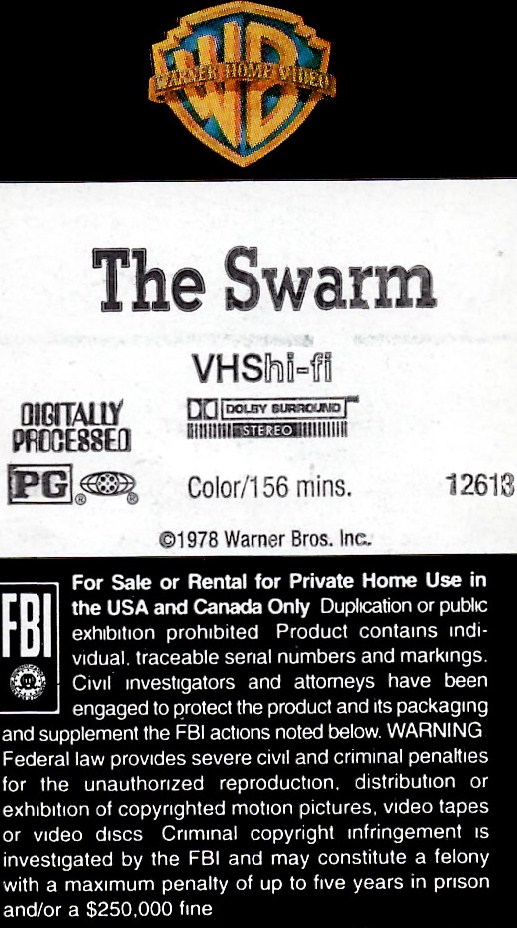 Monsters by the millions - and they're all for real!
This is more than a movie. It's a prediction!

The most terrifying thing about THE SWARM is that it is based on Fact: It exists. Fact: It has awesome destructive power. Fact: We don't know how to stop it.

Troup of soldiers led by Maj. Baker (Bradford Dillman) is ordered to investigate a basement level station which they believed was attacked. After Baker contacts his commander, Gen. Slater (Richard Widmark), they begin to investigate who drove a civilian van into the base. It is revealed to be owned by a scientist named Dr. Bradford Crane (Michael Caine), the only survivor of the attack. Slater orders two helicopters to check for a black mass (revealed to be bees), but the two helicopters are swarmed by the bees and explode, killing the pilots inside. Crane insists to Slater that the base was attacked by the same African killer bees that destroyed the helicopters. Helena Anderson (Katharine Ross), one of the base's doctors, supports Crane's story.
Meanwhile, in the countryside, a family is attacked by a swarm of the bees. The teenaged son manages to escape in a truck, although he is also bitten, and crashes into the Maryville town square, where the citizens are preparing for the annual flower festival. The boy is brought into the hands of military personnel, where he hallucinates a vision of giant bees attacking him, due to the aftereffects of the bee sting. Dr. Walter Krim (Henry Fonda) confirms to Crane that the very war they have feared for a long time has started against the bees. At the gates of the base, Slater must confront angry country bumpkin Jed Hawkins (Slim Pickens) who demands to see the dead body of his son, who was terminated by the bees. Hawkins takes the body bag and departs, leaving the entire watching crowd silent over the loss. Slater suggests airdropping poison on the swarm, but Crane considers the ecological possibilities of the situation.
Recovering from his earlier bee attack, the bitten son and some friends go in search of the hive to firebomb it, which results only in angering the bees, who head to Marysville. The bees reach Marysville and kill hundreds, including some children at the local school. Crane and Helena take shelter at the local diner, with pregnant café waitress Rita (Patty Duke Astin). Reporter Anne McGregor (Lee Grant) watches from the safety of her news van, hoping to get some exciting footage about the siege. After this most recent attack, Slater suggests evacuating many of the townsfolk in a train. However, the bees manage to besiege the train as well, killing several evacuees, including a love triangle made up of schoolteacher Maureen Scheuster (Olivia de Havilland), retiree Felix Austin (Ben Johnson), and town Mayor Clarence Tuttle (Fred MacMurray), who also runs the town's drug store.
Rita, confined to a hospital bed, gives birth to her child, falling in love with the doctor in the process. The savage swarm heads for Houston, so Crane drops eco-friendly bombs on them, hoping that the swarm senses will harm them and stay away from the town. The plan fails, and the young boy that released the swarm onto Marysville dies after once more visiting the hospital, which sends Helena into a rage about why the children have to die. Dr. Krim self-injects an experimental bee venom antidote to keep track of the results, although the trial proves fatal, and Krim dies from the effects of the venom. Meanwhile, nuclear power plant manager Dr. Andrews (Jose Ferrer) is convinced that his plant can withstand the attacks of the bees, ignoring the warnings of Dr. Hubbard (Richard Chamberlain). However, at that moment, the alarm sounds and the bees invade the plant, killing both Andrews and Hubbard, as well as completely destroying the plant and wiping out an entire town.
Crane and Slater analyze tapes from the original bee invasion and come to the possible conclusion that their alarm system attracted the swarm into the base. The bees invade once more, so Slater uses a blowtorch to allow Crane and Helena to escape. Sonically altered helicopters successfully manage to lure the bees out to sea, where they douse the water with oil and set the swarm ablaze. Crane wonders if their victory was overall successful or just temporary, then decides that "if we use our time wisely, the world just might survive."