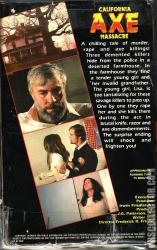 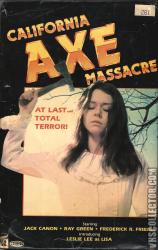 Stay away from Lisa!


Lisa, Lisa (released theatrically as California Axe Massacre and also known as Axe) is an American exploitation horror film, it was written and directed by Frederick R. Friedel and stars Leslie Lee as Lisa of the title


A group of three psychopaths on the run from the law go about terrorizing the local townsfolk of a small community before descending on an isolated farm which is home to a young girl named Lisa and her paralyzed grandfather. After suffering much humiliation at the hands of the gang, Lisa takes a ghastly, murderous revenge.


The film gained notoriety in 1984 when it was designated a video nasty in the UK and appeared on the director of public prosecution's list of banned films.[1] It was passed with cuts in 1999 and finally released uncut in 2005.


Released originally under the title Lisa, Lisa, this seedy murder-fest was later re-titled during drive-in circulation then again for its video release in 1985 as The California Axe Massacre to capitalize on the hype of another new arrival to video, Tobe Hooper's cult classic The Texas Chainsaw Massacre. The film itself (actually filmed in North Carolina, not California) has little in common with Hooper's hit; the bloody revenge scenario is more reminiscent of Wes Craven's Last House on the Left. It involves a gang of grimy fugitives who hole up in the rural abode of a pretty but unstable young woman (Leslie Lee) and proceed to abuse her and her grandfather. Of course, things get out of hand from there, and the hoods kill the old fogey, which brings gory retribution as the sweet young thing brandishes the title implement. Painfully cheap-looking, this tawdry exploiter is too slow-moving to sustain the interest of chop-em-up fans who might be lured by the title.