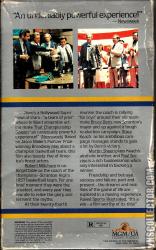 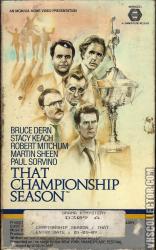 Additional Information
For one brief moment they were the greatest.

Adapted from Jason Miller's play which won the Pulitzer Prize, That Championship Season is about a group of men who, after 25 years, get together again for a high-school basketball team reunion. After drinking and chumming, the circle of friends soon find long-hidden anger and resentment resurfacing which become muddled with their current mid-life problems. Soon their long-time friendships are collapsing before them. Performers in this drama include Martin Sheen, Paul Sorvino, Robert Mitchum, Bruce Dern and Stacy Keach.


That Championship Season is Jason Miller's 1982 film version of his 1973 Pulitzer Prize winning Broadway play of the same name. It stars Robert Mitchum, Martin Sheen, Bruce Dern, Stacy Keach and Paul Sorvino and was filmed on location in Scranton, Pennsylvania where it is set.
In 1999, Sorvino directed a new adaptation of the play for Showtime in which he played Mitchum's role as the coach. This version co-starred Vincent D'Onofrio, Gary Sinise, Tony Shalhoub and Terry Kinney.


Jason Miller's play opened off-Broadway in 1972. After critical acclaim and 144 performances, it moved to a Broadway theater for a run of 844 more performances before closing on April 21, 1974.
For years Miller attempted to bring the play to the big screen before succeeding in 1982. As writer and director, he insisted on filming the exteriors in Scranton, Pennsylvania, where the story takes place. Miller was raised and educated there and his intent was to showcase the city and its people.
The first quarter of the film does just that as the characters and situations unfold. Locations used included Nay Aug Park (featuring a political rally using the townspeople as extras), the Delaware, Lackawanna & Western Railroad headquarters, the Martz Trailways terminal, Lackawanna Avenue, the city council chambers and more.
The score by composer Bill Conti (Rocky, The Right Stuff, For Your Eyes Only) was supplemented by the West Scranton High School Band. No soundtrack was ever released.
William Friedkin was originally going to direct the movie (he had worked with Jason Miller before on The Exorcist). Before he dropped out, Friedkin offered the part of Coach Delaney to William Holden. Holden was interested but died before he could accept the part.[citation needed]
The stars and director were paid $250,000 each plus a percentage of the profits. The film did a great deal to help the reputation of the fledgling Cannon Films, who financed the movi