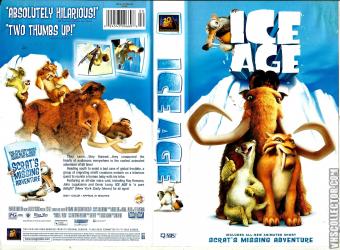 They came. They thawed. They conquered.

Set against the onslaught of the ice age -- and a world filled with wonder and danger -- the story revolves around three unforgettable characters: a wooly mammoth, a saber-toothed tiger, and a sloth, who unite to return a human baby to his tribe.

Ice Age is a 2002 American computer-animated comedy-drama adventure film produced by Blue Sky Studios and distributed by 20th Century Fox. It was directed by Carlos Saldanha and Chris Wedge from a story by Michael J. Wilson. The film stars Ray Romano, John Leguizamo, and Denis Leary and was nominated at the 75th Academy Awards for best animated feature.
The film was met with mostly positive reviews and was a box office success, starting a series with three sequels, Ice Age: The Meltdown, Ice Age: Dawn of the Dinosaurs, and Ice Age: Continental Drift.

ce Age was released into theaters on March 15, 2002 and was met with generally positive reviews from critics (making it the best reviewed film in its later-existing franchise). Rotten Tomatoes gave the film 77% approval rating, based on 164 reviews. The site's consensus reads: "Even though Ice Age is treading over the same grounds as Monsters, Inc. and Shrek, it has enough wit and laughs to stand on its own."[6] Similar site Metacritic had a score of 60% out of 31 reviews.[7] The film was nominated an Academy Award for Best Animated Feature, but lost to Spirited Away.[8] Roger Ebert of the Chicago Sun-Times gave the film 3 stars out of 4 and wrote "I came to scoff and stayed to smile".
The film was nominated for AFI's 10 Top 10 in the "Animation" genre.[9]

The film had a $46.3 million opening weekend, a large number not usually seen until the summer season, and way ahead of Fox's most optimistic projection of about $30 million. Ice Age broke the record for a March opening (first surpassed in 2006 by its sequel, Ice Age: The Meltdown) and was the then-third-best opening ever for an animated feature—after Monsters, Inc. ($62.6 million) and Toy Story 2 ($57.4 million).[10] Ice Age finished its domestic box office run with $176,387,405 and grossed $383,257,136 worldwide, being the 9th highest gross of 2002 in North America and the 8th best worldwide at the time.[11]