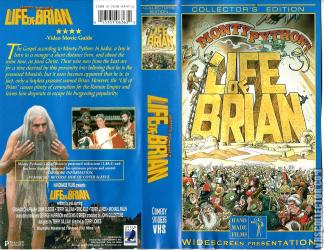 Monty Python's The Life of Brian

Additional Information
A motion picture destined to offend nearly two thirds of the civilized world. And severely annoy the other third.

See the movie that's controversial, sacrilegious, and blasphemous. But if that's not playing, see The Life of Brian.

Honk if you love Brian.

The film that is so funny it was banned in Norway.

He wasn't the messiah. He was a very naughty boy.

Just when you thought you were saved...


On a midnight clear 2,000 years ago, three wise men enter a manger where a babe is wrapped in swaddling clothes. It is an infant called Brian...and the three wise men are in the wrong manger. For the rest of his life, Brian (Graham Chapman) finds himself regarded as something of a messiah -- yet he's always in the shadow of this other guy from Galilee. Brian is witness to the Sermon of the Mount, but his seat is in such a bad location that he can't hear any of it ("Blessed are the cheesemakers?"). Ultimately, he is brought before Pontius Pilate and sentenced to crucifixion, which takes place at that crowded, nonexclusive execution site a few blocks shy of Calvary. Rather than utter the Last Six Words, Brian leads his fellow crucifixees in a spirited rendition of a British music-hall cheer-up song "Always Look on the Bright Side of Life." The whole Monty Python gang (Chapman, John Cleese, Michael Palin, Eric Idle, and Terry Gilliam) are on hand in multiple roles, playing such sacred characters as Stan Called Loretta, Biggus Dickus, Deadly Dirk, Casts the First Stone, and Intensely Dull Youth; also showing up are Goon Show veteran Spike Milligan and a Liverpool musician named George Harrison.


Monty Python's Life of Brian, also known as Life of Brian, is a 1979 British comedy film starring and written by the comedy group Monty Python (Graham Chapman, John Cleese, Terry Gilliam, Eric Idle, Terry Jones and Michael Palin), and directed by Jones. It tells the story of Brian Cohen (played by Chapman), a young Jewish man who is born on the same day as, and next door to, Jesus Christ and is subsequently mistaken for the Messiah.
The film contains themes of religious satire that were controversial at the time of its release, drawing accusations of blasphemy and protests from some religious groups. Thirty-nine local authorities in the UK either imposed an outright ban, or imposed an X (18 years) certificate, effectively preventing the film from being shown, as the distributors said the film could not be shown unless it was unedited and carried the original AA (14) certificate. Some countries, including Ireland and Norway, banned its showing, with a few of these bans lasting decades. The film makers used such notoriety to benefit their marketing campaign, with posters stating "So funny it was banned in Norway!".
The film was a box-office success, grossing fourth-highest of any film in the United Kingdom in 1979 and highest of any British film in the United States that year. It has remained popular since then, receiving positive reviews. The film received a 96% "Fresh" rating on Rotten Tomatoes with the consensus "One of the more cutting-edge films of the 1970s, this religious farce from the classic comedy troupe is as poignant as it is funny and satirical",[4] and it was named "greatest comedy film of all time" by several magazines and television networks. It is the first Monty Python film to receive an R rating in the United States.[5]


For the original British and Australian releases, a spoof travelogue narrated by John Cleese, Away From It All, was shown before the film itself. It consisted mostly of stock travelogue footage and featured arch comments from Cleese. For instance, a shot of Bulgarian girls in ceremonial dresses was accompanied by the comment "Hard to believe, isn't it, that these simple happy folk are dedicated to the destruction of Western Civilisation as we know it!", Communist Bulgaria being a member of the Warsaw Pact at the time. Not only was this a spoof of travelogues per se, it was a protest against the then common practice in Britain of showing cheaply made banal short features before a main feature.
Life of Brian opened on 17 August 1979 in five North American theatres and grossed $140,034 USD ($28,007 per screen) in its opening weekend. Its total gross was $19,398,164 USD. It was the highest grossing British film in North America that year. In addition, the film was the fourth highest grossing film in Britain in 1979.
On 30 April 2004, Life of Brian was re-released on five North American screens to "cash in" (as Terry Jones put it)[24] on the box office success of Mel Gibson's The Passion of the Christ. It grossed $26,376 USD ($5,275 per screen) in its opening weekend. It ran until October 2004, playing at 28 screens at its widest point, eventually grossing $646,124 USD during its re-release. By comparison, a re-release of Monty Python and the Holy Grail had earned $1.8 million USD three years earlier. A DVD of the film was also released that year.


Life of Brian has regularly been cited as a serious contender for the title "greatest comedy film of all time", and has been named as such in polls conducted by Total Film magazine in 2000,[38] the British TV network Channel 4 in 2006[39] and The Guardian newspaper in 2007.[40] Rotten Tomatoes lists it as one of the best reviewed comedies, with a 96% approval rating from 44 published reviews. Internet Movie Database includes the film in its list of the top 250 movies of all time.[41] A 2011 poll by Time Out magazine ranked it as the third greatest comedy film ever made,[42] behind Airplane! and This is Spinal Tap.
The BFI declared Life of Brian to be the 28th best British film of all time, in their equivalent of the AFI's original 100 Years...100 Movies list. It was the seventh highest ranking comedy on this list (four of the better placed efforts were classic Ealing Films).[43] Another Channel 4 poll in 2001 named it the 23rd greatest film of all time (the only comedy that came higher on this occasion was Billy Wilder's Some Like It Hot, which was ranked 5th).[44]
The line, "He's not the Messiah, he's a very naughty boy!", spoken by Brian's mother Mandy to the crowd assembled outside her house, has been voted by readers of BOL.com the funniest line in film history.[45] This poll also featured two of the film's other famous lines ("What have the Romans ever done for us?" and "I'm Brian and so's my wife") in the top 10.