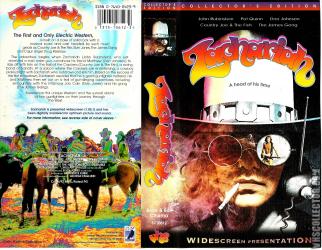 Additional Information
A Head of His Time


This western is permeated with the culture of the early '70s; it features contributions by writers for the Firesign Theatre, a counter-culture comedy troupe of the period, as well as music from groups such as The James Gang, Doug Kershaw, White Lightening and others--a rock/folk/country fusion. With highly stylized sets, music and story, this movie is full of surprises. Don Johnson as Matthew and John Rubinstein as Zachariah are two friends who go on the run. Together and separately they explore life as outlaws, at first enjoying and later being repelled by the reckless violence involved in gunfighting, bank robbing, and the other kinds of mayhem which come from the outlaw life. Along the way, they meet up with guides and gangs of various kinds, from a troupe of traveling, bank-robbing musicians (Country Joe and the Fish), to the greatest gunfighter in the world. Their paths diverge until Matthew comes gunning for Zachariah in a dramatic final confrontation

Zachariah (1971) is a film starring John Rubinstein as Zachariah and Don Johnson as his best friend Matthew. The film is loosely based on Hermann Hesse's novel Siddhartha, surrealistically adapted as a musical Western by Joe Massot and the members of the Firesign Theatre comedy troupe. The band Country Joe and the Fish perform as an inept gang of robbers (more adept as musicians) called "the Crackers," who are always "looking for people who like to draw." In the same vein, Zachariah boasts: "I can think, I can wait, and I'm fast on the draw." This is a parody of Siddhartha's famous line: "I can think, I can wait, I can fast."
Underneath the gunplay, the jokes, and the music, an important message is delivered: a life of pacifism, quiet contemplation, male bonding and vegetarianism is preferable to a life of violence.
This film is defined as being part of the Acid Western genre. More precisely, in its own publicity releases, it was called, "The first electric western." This was, in no small part, because this film featured several appearances and music supplied by successful rock bands from the era, including the James Gang and Country Joe and the Fish. Fiddler Doug Kershaw has a musical cameo that advances the plot of the film. The movie also features former John Coltrane sideman Elvin Jones as a gunslinging drummer named "Job Cain."
Cream's drummer Ginger Baker was originally going to play the part of Zachariah.
The Minneapolis group White Lightnin' (an off-shoot of the band The Litter) performs their rock and roll version of the William Tell Overture on the soundtrack. The New York Rock and Roll Ensemble perform Grave Digger on the soundtrack. The soundtrack features songs by the James Gang, Joe Walsh, and Country Joe and the Fish which are not available elsewhere. The soundtrack has recently become available..
Film composers Michael Kamen and Mark Snow can be seen half naked singing in a band while film composer/actor John Rubinstein's character makes love to Patricia Quinn (the American actress, who co-starred in Alice's Restaurant) in bed.
The film and its soundtrack received a positive review in the pages of Circus, a rock music magazine. The soundtrack album was released as a vinyl LP by Probe, a subsidiary label owned by ABC. It has not been reissued on compact disc or digitally.