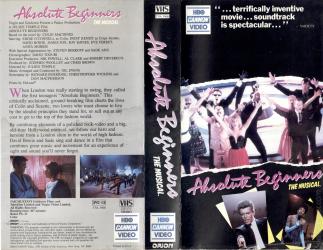 Additional Information
The music, the movement, the romance, the passion . . . all explodes on the BIG SCREEN.

The Sounds. The Moves. The Style. The Magic. The Musical.

Welcome to the world of your dreams!

The rise of teen culture in 1950s Britain provides the backdrop for Julien Temple's unconventional rock musical Absolute Beginners. The film centers on Colin, an 18-year-old with a talent for photography and a fondness for the neon nightlife of British jazz clubs. He also is in love with Crepe Suzette, an impulsive, ambitious young beauty who abandons him after attracting the attention of a powerful fashion designer. Depressed and aimless, Colin turns for help to a flashy ad executive (David Bowie) who promises to make him a star photographer. The former lovers take parallel paths to success, capitalizing on the youth mania gripping the nation. The film's nostalgic yet gently satirical look at teen culture is tempered by a recognition of the era's social tension, particularly a disturbing rise in racism. Despite these serious undertones, however, the film tells its story with a colorful vibrancy reminiscent of both MTV and old Hollywood musicals, filled with such show-stopping numbers as a memorable sequence in which Bowie dances on a giant typewriter. Critical reception was mixed, with some hailing the film's spectacular cinematography and ambitious scope, while others found the mixture of tones and style too inconsistent. The film also drew lukewarm response at the box office, with the memorable soundtrack receiving more attention than the film itself.


bsolute Beginners is a 1986 British rock musical film adapted from the Colin MacInnes book of the same name about life in late 1950s London. The film was directed by Julien Temple, featured David Bowie and Sade, and a breakthrough role by Patsy Kensit. The film was screened out of competition at the 1986 Cannes Film Festival.[3]
Upon its release on 18 April 1986, Absolute Beginners received immense coverage in the British media. At the time, the British film industry was perceived as being on the point of collapse (with the recent failure of the film Revolution). However, the movie was panned by critics and became a box office flop. Some of the criticisms included stylistic anachronisms, such as the mini-skirt and decidedly 1980s music from the likes of the Style Council and Sade, the bowdlerisation of Kensit's character (Crepe Suzette had been depicted as a promiscuous "negrophile" in the book), and the casting of Bowie, who made it a condition of his musical contribution.
Absolute Beginners has subsequently gained status as a cult movie[citation needed], in part due to its soundtrack[citation needed]. Some people[who?] compare the movie as the British equivalent of Streets of Fire, a 1984 American movie that was a retro-stylized rock movie with a notable soundtrack, also a commercial failure.
The commercial failure of Absolute Beginners and another film released about the same time, The Mission, led to the collapse of Goldcrest, a major British film studio.