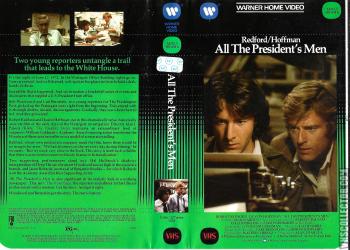 All the President's Men

Additional Information
At times it looked like it might cost them their jobs, their reputations, and maybe even their lives.

The most devastating detective story of the century!


Conspiracy film specialist Alan J. Pakula turned journalists Bob Woodward and Carl Bernstein's best-selling account of their Watergate investigation into one of the hit films of Bicentennial year 1976. While researching a story about a botched 1972 burglary of Democratic Party headquarters at the Watergate apartment complex, green Washington Post reporters/rivals Woodward (Robert Redford, who also exec produced) and Bernstein (Dustin Hoffman) stumble on a possible connection between the burglars and a White House staffer. With the circumspect approval of executive editor Ben Bradlee (Jason Robards), the pair digs deeper. Aided by a guilt-ridden turncoat bookkeeper (Jane Alexander) and the vital if cryptic guidance of Woodward's mystery source, Deep Throat (Hal Holbrook), Woodward and Bernstein "follow the money" all the way to the top of the Nixon administration. Despite Deep Throat's warnings that their lives are in danger, and the reluctance of older Post editors, Woodward and Bernstein are determined to get out the story of the crime and its presidential cover-up. Once Bradlee is convinced, the final teletype impassively taps out the historically explosive results


Robert Redford bought the rights to Woodward and Bernstein's book in 1974 for $450,000 with the notion to adapt it into a film with a budget of $5 million.[2] Ben Bradlee realized that the film was going to be made regardless of whether he approved of it or not and felt that it made "more sense to try to influence it factually".[2] The executive editor of the Washington Post hoped that the film would have an important impact on people who harbored a negative stereotype of newspapers.
William Goldman was hired by Redford to write the script in 1974. He says Bob Woodward was extremely helpful to him but Carl Bernstein was not. He also says his crucial decision as to structure was to throw away the second half of a book[3] Goldman delivered his first draft in August 1974 and Warners agreed to finance the movie.
Redford later claimed he was not happy with Goldman's first draft.[2] Woodward and Bernstein also read it and did not like it. Redford asked for their suggestions but Bernstein and then-girlfriend writer Nora Ephron wrote their own draft. Redford showed this draft to Goldman, suggesting there might be some material they could use; Goldman later called Redford's acceptance of the Bernstein-Ephron draft a "gutless betrayal".[4] Redford later expressed dissatisfaction with the Ephron-Bernstein draft, saying, "a lot of it was sophomoric and way off the beat".[2]According to Goldman, "in what they wrote, Bernstein was sure catnip to the ladies".[5] He also says a scene of Bernstein and Ephron's made it to the final film, a bit where Bernstein outfakes a secretary in order to see someone - something which didn't happen in real life.
Alan J. Pakula was then hired to direct and requested rewrites from Goldman. Redford and Pakula held all-day sessions working on the script. The director also spent hours interviewing editors and reporters, taking notes of their comments. Claims that Pakula and Redford rewrote the screenplay have been debunked, however, after an investigation into the matter by Richard Stayton in Written By magazine. Stayton compared several drafts of the script, including the final production draft, and concluded that Goldman was properly credited as the writer and that the final draft had "William Goldman's distinct signature on each page."[6]
Dustin Hoffman and Redford visited the Post offices for months, sitting in on news conferences and conducting research for their roles.[2] The Post denied the production permission to shoot in its newsroom and so set designers took measurements of the newspaper's offices, photographed everything, and boxes of trash were gathered and transported to sets recreating the newsroom on two soundstages in Hollywood's Burbank Studios at a cost of $200,000. The filmmakers went to great lengths for accuracy and authenticity, including making replicas of phone books that were no longer in existence.[2] Nearly 200 desks at $500 apiece were purchased from the same firm that sold desks to the Post in 1971. The desks were also colored the same precise shade of paint. The production was supplied with a brick from the main lobby of the Post so that it could be duplicated in fiberglass for the set. Principal photography began on May 12, 1975 in Washington, D.C.[2]
The billing followed the formula of James Stewart and John Wayne in John Ford's The Man Who Shot Liberty Valance (1962), with Redford billed over Hoffman in the posters and trailers and Hoffman billed above Redford in the film itself.