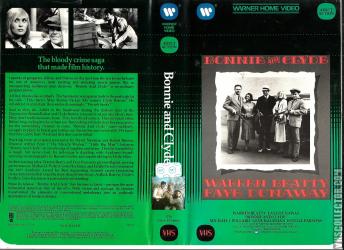 Additional Information
"The strangest damned gang you ever heard of. They're young. They're in love. They rob banks."

They're young... they're in love... and they kill people.

They met in 1930. She was stark naked, yelling at him out the window while he tried to steal her mother's car. In a matter of minutes they robbed a store, fired a few shots and then stole somebody else's car. At that point they had not yet been introduced.

A brilliantly made, groundbreaking film that chronicles the short lives of America's most infamous criminals.


Producer/star Warren Beatty had to convince Warner Bros. to finance this film, which went on to become the studio's second-highest grosser. It also caused major controversy by redefining violence in cinema and casting its criminal protagonists as sympathetic anti-heroes. Based loosely on the true exploits of Clyde Barrow and Bonnie Parker during the 30s, the film begins as Clyde (Beatty) tries to steal the car of Bonnie Parker (Faye Dunaway)'s mother. Bonnie is excited by Clyde's outlaw demeanor, and he further stimulates her by robbing a store in her presence. Clyde steals a car, with Bonnie in tow, and their legendary crime spree begins. The two move from town to town, pulling off small heists, until they join up with Clyde's brother Buck (Gene Hackman), his shrill wife Blanche (Estelle Parsons), and a slow-witted gas station attendant named C.W. Moss (Michael J. Pollard). The new gang robs a bank and Clyde is soon painted in the press as a Depression-era Robin Hood when he allows one bank customer to hold onto his money. Soon the police are on the gang's trail and they are constantly on the run, even kidnapping a Texas Ranger (Denver Pyle) and setting him adrift on a raft, handcuffed, after he spits in Bonnie's face when she kisses him. That same ranger leads a later raid on the gang that leaves Buck dying, Blanche captured, and both Clyde and Bonnie injured. The ever-loyal C.W. takes them to his father's house. C.W.'s father disaproves his son's affiliation with gangsters and enters a plea bargain with the Texas Rangers. A trap is set that ends in one of the bloodiest death scenes in cinematic history. The film made stars out of Beatty and Dunaway, and it also featured the screen debut of Gene Wilder as a mortician briefly captured by the gang. Its portrayal of Bonnie and Clyde as rebels who empathized with the poor working folks of the 1930s struck a chord with the counterculture of the 1960s and helped generate a new, young audience for American movies that carried over into Hollywood's renewal of the 1970s. Its combination of sex and violence with dynamic stars, social relevance, a traditional Hollywood genre, and an appeal to hip young audiences set the pace for many American movies to come.