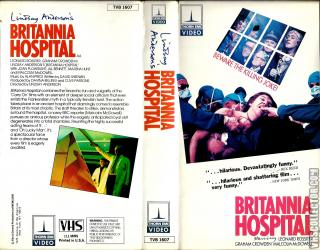 Additional Information
Will they ever recover ... ?

This dark comedy charts the chaos that results when the panicked staff of a major English hospital attempts to prepare for a visit by the Queen Mother, only to face every problem imaginable. Britannia Hospital clearly attempts to recapture the anarchic bite of director Lindsay Anderson's previous satires If... and O Lucky Man, but fails to achieve the same combination of intelligent political critique, comic lunacy, and skillful filmmaking. (Indeed, the three films are often considered a loosely linked trilogy, largely due to the presence in all three of lead Malcolm McDowell). The film does make a valiant effort, but its commentary on the poor, labor disputes, and the inhumanity of bureaucratic institutions mixes uneasily with the film's broader elements, like the experiments of a cartoonish mad scientist. The result is often quite entertaining on a scene-by-scene basis, but the film never reaches the level of delirious, farcical energy or satirical sharpness to which it clearly aspires.

Britannia Hospital is a 1982 black comedy film by British director Lindsay Anderson which targets the National Health Service and contemporary British society. It was entered into the 1982 Cannes Film Festival and Fantasporto.[3]
Britannia Hospital is the final part of Anderson's critically acclaimed trilogy of films, written by David Sherwin, that follow the adventures of Mick Travis (portrayed by Malcolm McDowell) as he travels through a strange and sometimes surreal Britain. From his days at boarding school in if.... (1968) to his journey from coffee salesman to film star in O Lucky Man! (1973), Travis' adventures finally come to an end in Britannia Hospital which sees Mick as a muckraking reporter investigating the bizarre activities of Professor Millar, played by Graham Crowden, whom he had had a run in with in O Lucky Man. All three films have characters in common. Some of the characters from if...., that didn't turn up in O Lucky Man, returned for Britannia Hospital.
The absurdities of human behaviour as we move into the Twenty-first Century are too extreme — and too dangerous — to permit us the luxury of sentimentalism or tears. But by looking at humanity objectively and without indulgence, we may hope to save it. Laughter can help.
—Lindsay Anderson

Britannia Hospital was a box-office failure. The film was lambasted by the British critics on release, although Geoff Daniel, David Robinson and Dilys Powell listed it as one of the films of the year.[4] Britannia Hospital was withdrawn by EMI a month after its release. Critic Ian Haydn Smith considers Britannia Hospital the "nadir" of Anderson's career. "Replacing satire with broad comedy, the film fails on every level in its attempt to critique the state of the National Health Service".[5] The film won the "Audience Jury Award" at Fantasporto.
It has since been widely available on both VHS and DVD.