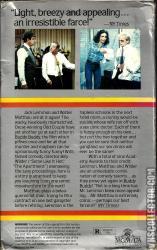 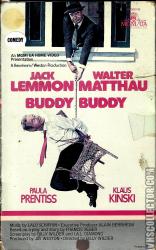 Additional Information
The greatest movie buddies of all time are back!

When a troubled shooter meets a troublemaker it's the beginning of a ferociously funny friendship.
Buddy Buddy is a 1981 American comedy film directed by Billy Wilder that stars Jack Lemmon and Walter Matthau. The screenplay by Wilder and I.A.L. Diamond is based on the 1973 French language film L'Emmerdeur, which screenwriter Francis Veber had adapted from his play Le contrat.

The film proved to be the last directed by Wilder, who in later years said, "If I met all my old pictures in a crowd, personified, there are some that would make me happy and proud, and I would embrace them . . . but Buddy Buddy I'd try to ignore."[3]

Buddy Buddy is also the final big-screen performance to date by actress Paula Prentiss, not counting an uncredited scene in 1996's Mrs. Winterbourne and a cameo in a 2007 film, Hard Four, starring Ross Benjamin, her son.


As if in some way Billy Wilder sensed that Buddy Buddy would ultimately turn out to be his final feature film, Wilder lets loose scatter-shot stingers at a wide range of pop-culture targets -- from sex clinics, to 60 Minutes, to movie references, to disco, to Betamax video recorders. Based on Francis Veber and Edouard Molinaro's L'emmerdeur (known in the United States as A Pain in the A. . .), Buddy Buddy concerns the unlikely pairing of a gruff hitman and a suicidal klutz. Walter Matthau plays a professional killer going by the name of Trabucco, who is on his way to rub out gangster Rudy "Disco" Gambola (Fil Formicola), set to testify against the mob. As Trabucco heads off to a hotel across the street from the courthouse where he plans to set his hit, he runs into the depressed Victor Clooney (Jack Lemmon), who laments the fact that his wife has left him for the head of a weird Californian sex clinic. Trabucco keeps walking and sets up his rifle in a hotel room. He is disturbed by Victor trying to hang himself in the adjoining hotel room and tries to prevent him from killing himself by restraining him, but Victor breaks loose and climbs onto the ledge of the hotel window. To get Victor to come back in, he agrees to drive him to the clinic to see his wife. The two go to the clinic where Victor's wife Celia (Paula Prentiss) informs Victor that she is in love in the head of the clinic, quack Dr. Zuckerbrot (Klaus Kinski). When Victor finds out that Celia is filing for divorce, he heads back to the hotel to kill himself, with Celia and Dr. Zuckerbrot in pursuit. Arriving at the hotel, they plan to inject Victor with a sedative but stick Trabucco with the needle instead. Trabucco reveals to Victor his assignment to kill Rudy, and Victor tries to help him with the killing.

Hitman Trabucco has been hired to eliminate Rudy "Disco" Gambola before he testifies against fellow members of the Mob, but completing the contract becomes problematic once he encounters suicidal Victor Clooney, an emotionally disturbed television censor staying in the room adjacent to his in the Ramona Hotel in Riverside, California.

When Victor climbs onto the ledge outside his window, Trabucco convinces him not to jump by agreeing to drive him to the Institute for Sexual Fulfillment, the nearby clinic where Victor's wife Celia, a researcher for 60 Minutes, is gathering information for a segment on the program.

At the clinic, Victor discovers Celia has fallen in love with Dr. Zuckerbrot, who is concerned her husband's suicide will reflect badly on his practice. Trabucco accidentally is injected with a tranquilizer intended for Victor, who volunteers to fulfill the killer's contract when Trabucco's vision is impaired. After overcoming assorted complications, Victor completes his task. However, despite Victor's high hopes, Trabucco has no intention of sticking together and parts ways with him following their escape.

Trabucco retires to a tropical island, where he unexpectedly is joined by his nemesis after Celia runs off with Dr. Zuckerbrot's female receptionist to become a lesbian couple. Desperate to see Victor gone, Trabucco suggests to his native attendant to reinstate the old custom of human sacrifices for the local volcano...

Of the mainstream critics, only Vincent Canby of the New York Times liked the film. Calling it "slight but irresistible," he observed it "doesn't compare with the greatest Wilder-Diamond films, including The Fortune Cookie, which launched Mr. Lemmon and Mr. Matthau as a team, but it is the lightest, breeziest comedy any one of them has been associated with in years." He added, "There's something most appealing about the simplicity of the physical production and the small cast. I suspect that one of the reasons Buddy Buddy is so congenial, even when a gag doesn't build to the anticipated boff, is because you never feel intimidated by it. It doesn't attempt to overwhelm you with the kind of gigantic sets, props and crowd scenes that made farces on the order of 1941 and The Blues Brothers so oppressive. Buddy Buddy travels light, unencumbered by expensive special effects, fueled only by the talents of its actors and its director's irrepressible sense of the ridiculous." He said of Lemmon, "Not in a long time has [he] been more appealing," and he described Matthau as "extremely comic – perhaps our best farceur."[4]

Far less enthusiastic was Roger Ebert of the Chicago Sun-Times, who stated, "This movie is appalling. It made me want to rub my eyes. Was it possible that the great Billy Wilder . . . could possibly have made a film this bad? Buddy Buddy is very bad. It is a comedy without any laughs. (And, yes, I mean literally that it contains no laughs.) But it is worse than that. It succeeds in reducing two of the most charming actors in American motion picture history to unlikable ciphers. Can you imagine a film that co-stars Walter Matthau and Jack Lemmon and yet contains no charm, ebullience, wit, charisma – even friendliness? This whole movie is like one of those pathetic Hollywood monsters drained of its life fluids . . . Basically, we are invited to watch two drudges meander through a witless, pointless exercise in farce . . . Buddy Buddy is incompetent. And that is the saddest word I can think of to describe it."[5]

Channel 4 said, "Wilder helming the classic comic pairing of Matthau and Lemmon is always going to be difficult to dismiss, but it has to be said that all involved had seen better days at the time this got made . . . There's the recognizable chemistry between the two leads, but little else here to recommend. It would be foolish to come to this movie expecting The Odd Couple or The Apartment, but you do expect something a little better than this."