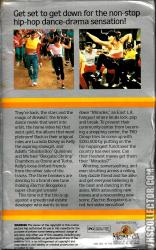 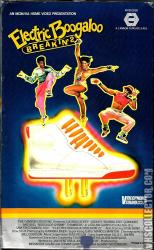 Additional Information
25 Years On and Still the Break dance Classic
If you can't beat the system...break it!

Believe in the beat that's on the street, it's hoppin' and poppin', they're breakin' and lockin'.

They're back...for everyone who believes in the beat.


Breakdancing, hip-hop, rap, and a good time are the main stars of this standard teen movie about youths trying to raise money to save their community club from being razed for a shopping mall. Ozone (Adolfo Quiñones) and Turbo (Michael Chambers) are two master breakdancers who have started a community club to teach other teens how to manage the acrobatics of the dance without literally breaking anything. Their efforts create some choreographed, group breakdancing that is rather innovative. But an evil developer (Peter MacLean) sees their property as ideal for a shopping mall project -- and a crooked politician is willing to back him up for a fee. As the teens do their best to raise money to keep their center, some are also battling with restrictive parents or trying to ease into romantic liaisons that offer their own challenges.

Breakin' 2: Electric Boogaloo is the 1984 sequel to the breakdancing film Breakin'. It was first released the same year as its predecessor by TriStar Pictures, and by Cannon Films the year after. In some international locations, the movie was released under the title Breakdance 2: Electric Boogaloo. A further sequel, Rappin' (also known as Breakdance 3) was made, but had an unconnected plot and different lead characters - only Ice-T features in all three movies.

Since the release of the film, the subtitle "Electric Boogaloo", originally a reference to a funk-oriented dance style of the same name, has entered the pop-culture lexicon as a pejorative nickname for unnecessary and/or unwanted sequels.[1] The usual connotation suggests either a sequel title that is ridiculous, or that it is the follow-up to an obscure, formulaic, or simply unsuccessful movie (or other work)

Though most critics rated the film poorly,[4][5] New York Press film critic Armond White considered it to be "superb"[6] and Roger Ebert gave the film a three-star rating.[