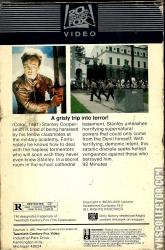 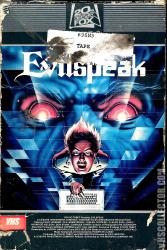 Remember the little kid you used to pick on? Well, he's a big boy now.


Professional weirdo Clint Howard plays one of his more interesting oppressed-geek roles in this occult revenge thriller about a tormented military-school nerd (apparently in his mid-thirties!) whose personal computer provides the only solace from the endless taunts and pranks of his fellow cadets. He also has an intense fascination with the occult, leading him to investigate an arcane tome secreted within an ancient, crumbling chapel. In an attempt to decipher the text, he feeds it into the computer, which translates the writings into actual working spells. As Clint's mind reels with the possibilities of sweet revenge against his cruel classmates and teachers, the demonic forces once trapped within the book begin to exert control over his mind and body. Before long, he is able to summon an army of snarling devil-pigs (no, that's not a misprint) to do his evil bidding. Though this is essentially a gender-bent rip-off of Carrie, there is enough in the way of spooky atmosphere and well-staged shocks to keep less discriminating horror fans interested.

Stanley Coopersmith (Clint Howard), a young cadet at an American military academy, is a social outcast bullied by his classmates.
In the film's introduction, we see Satanic leader Father Estaban (Richard Moll) and his followers on the shore of Spain during the Dark Ages. They are approached by a church official who tells them they are banished from Spain and denied God's grace unless they renounce Satan and their evil ways.
In the present, Coopersmith is being punished by being forced to clean the church cellar. While cleaning the darkened cellar he finds a room belonging to Father Estaban which contains books of black magic along with Father Estaban's diary. Coopersmith becomes fascinated with the book and uses his computer skills to translate it. In the translation he discovers that Estaban was a Satanist and the book contains rituals for performing the Black Mass along with a promise by Estaban "I Will Return". Coopersmith plots his revenge on his classmates using black magic. After arriving the mess hall too late for lunch, he befriends the school's cook who makes a meal for him and shows him a litter of puppies that his dog just had. Coopersmith takes the smallest pup for himself, names him Fred and hides him in the church cellar. After consulting the translation of Estaban's diary he discovers he needs a consecrated host and blood to complete the list of items needed for the Black Mass. Coopersmith steals the host from the church, he then notices Estaban's portrait on the wall. Using the translation he attempts the ritual and is suddenly attacked by his classmates wearing masks and robes. After knocking him unconscious they leave. Coopersmith, thinking he has successfully performed the ritual is told by his computer that the ritual was incomplete and a pentagram appears on the computer screen. When Coopersmith accidentally wakes the drunken caretaker he is accused of being a thief for stealing his crowbar the caretaker attempts to break Fred's neck, Coopersmith then kicks him the groin. The caretaker attacks Coopersmith who screams for help and the computer flares to life with a red pentagram on it. An unseen force then takes the caretaker's head and turns it completely around breaking his neck. Coopersmith then discovers a catacomb filled with decapitated skeletal remains and the crypt of Father Estaban. Hiding the caretaker's body he leaves.
When he's sent to the office Coopersmith accidentally leaves the diary on the desk of the school secretary who hides it. While Coopersmith is being made to clean the stables the office secretary begins to finger the jewels on the front of the diary. Trying to pry the jewels out of their settings causes the pigs in the stable to attack Coopersmith. Unable to remove them, the secretary takes the book home with her. She then disrobes, gets into a shower and is attacked and devoured by black boars that manifest out of nowhere.
After watching a beauty pageant at the school's pep rally he's told by his classmates if tries to play in the big game tomorrow they'll find and kill Fred. After witnessing his beating the school principal kicks him off the soccer team.
After a night of drinking Coopersmith's classmates make their way into Estaban's hidden room and find Coopersmith's computer program. After killing Fred the computer says that the blood used must be human blood. After finding Fred's mutilated body Coopersmith becomes completely enraged. The diary then appears laying on Estaban's casket. When a teacher catches Coopersmith in the church stealing the host he follows him to the catacombs where Coopersmith is translating the rest of the diary. Coopersmith pledging his life to Satan then kills his teacher on a spiked wheel and collects his blood.
Unaware of the ritual being performed below Coopersmith's classmates,coach, principal and minister are all in attendance at a service above. After successfully performing the ritual Father Estaban's soul then possesses Coopersmith's body and takes up a sword. Meanwhile a nail from the large crucifix hanging over the church's altar is pried out by an unseen force and flies across the room and is driven into the minister's skull. Coopersmith then rises from the cellar below engulfed in flames and wielding a sword. A pack a large black boars pours out of the hole in the floor where Coopersmith now hovers above everyone else.
He then decapitates his principal and his coach. His classmates try to flee only to be devoured by the boars. In the catacombs the lead bully tries to escape only to have the caretaker come back to life and remove the boy's heart while it is still beating. The caption at the end says that Stanley Coopersmith survived the attack but after witnessing the fiery death of his classmates went catatonic from shock and was sentenced to Sunnydale asylum where he remains. The end of the film shows Coopersmith's true fate as his face appears on the computer screen in the cellar with the words "I Will Return".

Bill Gibron of DVD Verdict wrote, "If you want to take a walk down that home video memory lane, that avenue lined with VHS variations of the old demonic possession/dolt's revenge cinema, then give Evilspeak a spin. But beware! There is a lot of padding in this paranormal davenport, but if you stick with it long enough, you'll be rewarded with beautiful torrents of red spurting torment. After all, how can you dismiss outright a film featuring SATANIC PIGS OF HATE!?"[3] AllMovie called it "essentially a gender-bent rip-off of Carrie", though "there is enough in the way of spooky atmosphere and well-staged shocks to keep less discriminating horror fans interested."[4]
TV Guide said, "The directorial debut of Eric Weston, EVILSPEAK is remarkably engaging, imaginative, and well crafted. It contains a strong performance from Howard, plus a deliciously over-the-top nasty turn by veteran character actor R.G. Armstrong.

The movie was once cited as a video nasty in the UK following its release on the Videospace label. It remained banned for a number of years as part of the Video Recordings Act 1984, thanks to its gory climax and themes of satanism.
The film was reclassified and re-released in 1987 but with over three minutes of cuts which included the removal of most of the gore from the climax and all text images of the Black Mass on the computer screen. It was then subsequently passed complete by the BBFC in 2004 and is now available in both an uncut form and a version re-edited by the distributors to tighten up the dialogue.[6]
Anton LaVey, the late founder and High Priest of the Church of Satan, was a great fan of the film and considered it to be very Satanic.[7]
Actor Clint Howard said that director Eric Weston's original version of the film that was submitted to the MPAA was longer, and contained more blood, gore, and nudity than the unrated version of the film. Especially during the shower/pig attack scene, and the final confrontation. To date this version of the film has never been released on Blu-Ray, DVD, or VHS.

Catalog Number
NONE
Primary Distributor (If not listed, select "OTHER")
Apex
1987VHSCLAMUnited Kingdom
Packaging Front, Spine and Back - OR - Square Packaging Front