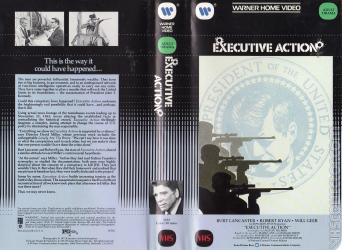 Released two weeks before the tenth anniversary of Kennedy's assassination, Executive Action opened to a storm of controversy about the events shown. It then was pulled from many theaters in its first and second weeks of showing because of the bad press. Many television stations also refused to run trailers for the film, including WNBC-TV in New York City.
Besides the negative press, the film was also generally panned. Pauline Kael called it a "feeble, insensitive fictionalization ... It's a dodo-bird of a movie, the winner of the Tora! Tora! Tora!' prize in miniature. With matchlessly dull performances ..."[5] Leonard Maltin declares it a Bomb in his Movie Guide, calling it an "excruciatingly dull thriller [that] promised to clear the air about JFK's assassination but was more successful at clearing theaters."[6]
In contrast, The New York Times gave it a positive review, its critic Nora Sayre writing, "Executive Action, ... offers a tactful, low-key blend of fact and invention. The film makers do not insist that they have solved John Kennedy's murder; instead, they simply evoke what might have happened, ... The film's sternest and strongest point is that only a crazed person acting on his own would have been acceptable to the American public — which, at that time, certainly did not want to believe in a conspiracy."[7]
Meanwhile, Roger Ebert was equivocal, giving the film two stars and calling it "a dramatized rewrite of all those old assassination conspiracy books."[8] Ebert stated, "There’s something exploitative and unseemly in the way this movie takes the real blood and anguish and fits it neatly into a semi-documentary thriller."[8] He added that "Executive Action doesn't seem much to want to entertain" and called Miller's direction "colorless."[8] In a positive comment, Ebert wrote: "It has the power, of evoking what will probably remain, for most of us, the most stunning public moment of our lives: the moment when we first learned that the President had been shot