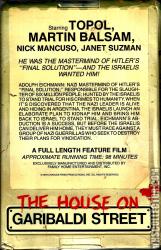 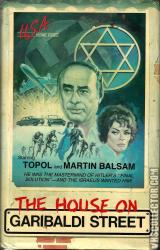 The House on Garibaldi Street

Additional Information
Based on a true story, this made-for-TV spy movie chronicles the 1960 capture of a Nazi in South America. When Israeli agents find out that Nazi Adolph Eichmann survived the war and is living in Argentina, they hatch a plan to kidnap him and bring him to trial for his crimes. Martin Balsam portrays Isser Harel, who wrote the book that served as the basis for this film. ~

Israeli premier David Ben-Gurion approves a Mossad operation to be led by Isser Harel to kidnap Adolf Eichmann, the Nazi mass murderer. Harel's team travels to Argentina to track down Ricardo Klement, who they believe is Eichmann. They soon discover that the Klement family moved two months before. Primo, a local contact, goes to their former residence and gets a lead to Dieter, one of Eichmann's sons. They arrange for a bellboy to deliver a parcel to Dieter, addressed to another son, Nicholas. They trail Dieter, but he goes to the dentist instead of his house. Michael, the agent in charge, sends the bellboy back to the Klements' old address, and he learns their new one. Harel is told that Israel has been invited to send a delegation to Argentina's 150th celebration of its independence, so a special flight can be sent, on which Eichmann can be smuggled out of the country. The Mossad finally spot Eichmann, and Harel flies to Argentina to take over the operation. The Mossad rent three houses near Buenos Aires. They snatch Eichmann off the street and take him to one of the houses. Dieter Eichmann contacts other local Nazis for help in finding his father. The Israeli agents watching Eichmann are conflicted: they want to kill him, but their orders are to bring him back alive. The Israeli special plane arrives. Meanwhile, Michael interrogates Eichmann about his role in the Holocaust. Michael thinks they are on the verge of being caught by the police and should kill Eichmann while they can, but the others talk him out of it. When it is time to leave, they drug Eichmann and disguise him as an Israeli mechanic injured in an accident. A policeman in the pay of the Nazis tries to stop the takeoff, but they persuade the airport officials to let the flight proceed. The plane returns to Israel, where Eichmann is tried, found guilty of crimes against humanity, and executed.

A dramatization, filmed in Spain, about the events leading up to the capture of Nazi war criminal Adolph Eichmann by Israeli agents in Argentina in 1960. Two of the actors, Topol and Janet Suzman, are best known to American moviegoers as Academy Award nominees for their roles in "Fiddler on the Roof" and "Nicholas and Alexandra" respectively, while Martin Balsam portrays the author of the book on which this film was based, who at the time was the head of Israeli Intelligence.
Related Links
Pittsburgh Gazette pg 19