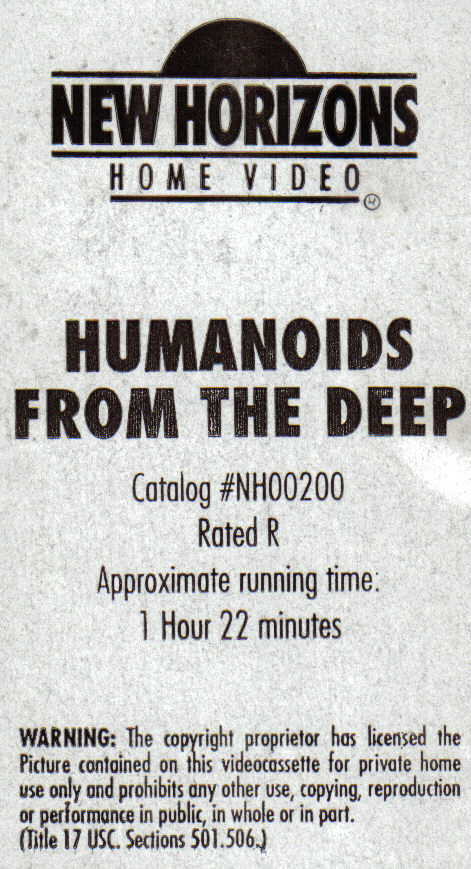 Humanoids From The Deep

Additional Information
CAUTION:
Some copies of this tape actually contain the 1996 TV Movie version of "Humanoids From The Deep" and not the 1980 version as advertised. The slipcase and tape sticker both have the correct catalog # and run time for the 1980 version but it's actually the 1996 TV version. Roger Corman was the executive producer on both movies. However, on the 1980 version he is uncredited.

It comes with an interview of Roger Corman by Leonard Maltin.
The white print date on the tape spine is 11/4/99
Rated R
Digitally Remastered

Between Life and Death, There Is ... "Humanoids From The Deep"

From The Caverns Of The Deep... It Strikes!

They're not human. But they hunt human women. Not for killing. For mating.

This gory, scary low-budget shocker from the Roger Corman stable concerns the battle over a salmon cannery in a Pacific Northwest town. Genetically treated salmon escape the plant and are eaten by coelacanths, who mutate into humanoid monsters with giant craniums and sharp claws. The creatures begin attacking teen couples, killing the boys and mating with the girls (in some pretty graphic monster-rape scenes). Eventually, a bunch of them create total pandemonium at the annual salmon festival. Barbara Peeters directs with flair, Rob Bottin's effects are nauseatingly effective, and the cast is good, especially Vic Morrow as a racist fisherman and Doug McClure as the stalwart hero. An uncompromising shockfest with enough gratuitous blood and nudity to keep fans happy, the film features an Alien-inspired shock ending which still makes viewers jump today.

Humanoids From The Deep is a 1980's updating of similarly plotted genre offerings from the 1950's and 1960's - Del Tenney's 1964 The Horror Of Party Beach in particular - with the addition of lots of graphic violence and nudity. The film was a modest financial success for New World Pictures.

Critical reviews were far from laudatory. Paul Taylor, in Time Out, said, "Despite the sex of the director, a more blatant endorsement of exploitation cinema's current anti-women slant would be hard to find… Peeters also lies on the gore pretty thick amid the usual visceral drive-in hooks and rip-offs from genre hits; and with the humor of an offering like Piranha entirely absent, this turn out to be a nasty piece of work all round."[4] Phil Hardy’s The Aurum Film Encyclopedia: Horror, said, after noting that additional sex and violence scenes had been edited into the film without director Peeter’s knowledge, "…weighed down as it is with solemn musings about ecology and dispossessed Indians, it looks as if it had always been a hopeless case."[2] Nathaniel Thompson, on his Mondo Digital website, observed, "Director Peeters claimed that Roger Corman added some of the more explicit shots of slimy nudity at the last minute to give the film some extra kick, but frankly, the movie needed it. Though competently handled, the lack of visual style, occasionally slow pacing, and peculiar lack of (intentional) humor hinder this from becoming an all-out trash masterpiece…"[5] However, Michael Weldon, writing in his Psychotronic Encyclopedia of Film, opined, "Many were offended by the rape aspect of this fast-paced thriller featuring lots of Creature From The Black Lagoon -inspired monsters…Like it or not, it was a hit and is not dull."[6]
Related Links
Variety
Spinning Image
Not Coming...
Ninja Dixon
Video Clip: VHS Trailer
Video Clip: Trailer (As Monster)
Video Clip: Schlockmeisters
Video Clip: Cinema Slashes
Video Clip: Trailer