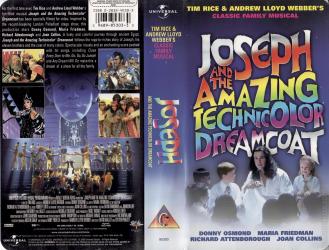 Joseph and the Amazing Technicolor Dreamcoat

Additional Information
Tim Rice and Andrew Lloyd Webber's first musical blockbuster comes to video in this production starring Donny Osmond, who racked up more than 1800 stage performances in the title role. Based on the Biblical story of Joseph and his coat of many colors, in this adaptation Joseph (Osmond) is the favorite son of Jacob (Richard Attenborough), but his siblings resent the attention Jacob showers upon him. Joseph's brothers sell him into slavery, and eventually Joseph finds himself in jail. However, his favorable interpretation of the dreams of the Pharaoh (Robert Torti) win him the admiration of the all-powerful leader, and soon Joseph is one of the most powerful men in Egypt. Shot as a feature film but released directly to video, Joseph and the Amazing Technicolor Dreamcoat also stars Joan Collins as Mrs. Potiphar and Maria Freidman as the Narrator. Composer Andrew Lloyd Webber also served as a producer.
Related Links
VHS Trailer
Newsreport