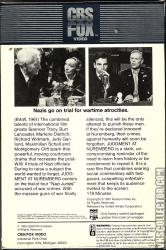 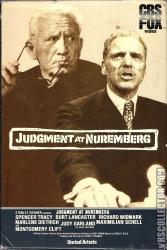 Additional Information
More than a motion picture...It is an overwhelming experience in human emotion you will never forget!

The event the world will never forget.

Once in a generation...a motion picture explodes into greatness!


After the end of World War II, the world gradually became aware of the full extent of the war crimes perpetrated by the Third Reich. In 1948, a series of trials were held in Nuremberg, Germany, by an international tribunal, headed by American legal and military officials, with the intent of bringing to justice those guilty of crimes against humanity. However, by that time most of the major figures of the Nazi regime were either dead or long missing, and in the resulting legal proceedings American judges often found themselves confronting the question of how much responsibility someone held who had "just followed orders." Judgment at Nuremberg is a dramatized version of the proceedings at one of these trials, in which Judge Dan Haywood (Spencer Tracy) is overseeing the trials of four German judges -- most notably Dr. Ernst Janning (Burt Lancaster) and Emil Hahn (Werner Klemperer) -- accused of knowingly sentencing innocent men to death in collusion with the Nazis. Representing the defense is attorney Hans Rolfe (Maximilian Schell), while prosecuting the accused is U.S. Col. Tad Lawson (Richard Widmark). As the trial goes on, both the visiting Americans and their reluctant German hosts often find themselves facing the legacy of the war, and how both of their nations have been irrevocably changed by it. Judgment at Nuremberg also features notable supporting performances by Marlene Dietrich, Judy Garland, and Montgomery Clift. Originally written and produced as a play for television, the screen version of Judgment at Nuremberg was nominated for 11 Academy Awards, with Maximilian Schell and Abby Mann taking home Oscars for (respectively) Best Actor and Best Adapted Screenplay


Judgment at Nuremberg is a 1961 American drama film dealing with the Holocaust; with non-combatant (e.g., crimes committed in violation of the Law of Nations; or the Laws of War, against a civilian population) War Crimes, and the Post-World War II geo-political complexity of the Nuremberg Trials. The picture was written by Abby Mann, directed by Stanley Kramer, and stars Spencer Tracy, Burt Lancaster, Richard Widmark, Maximilian Schell, Werner Klemperer, Marlene Dietrich, Judy Garland, William Shatner and Montgomery Clift. An earlier adaptation had been broadcast as a television episode of Playhouse 90.[3] Schell and Klemperer played the same roles in this version as well.
While the persecution of the Jews is shown (in newsreel footage) and discussed, the incidents and events which form the foundation of the film's plot are largely concerned with the domestic situation in Germany prior to World War II.
This trial depicted was part of the Subsequent Nuremberg Trials (more formally, the Trials of War Criminals before the Nuremberg Military Tribunals), a series of twelve U.S. military tribunals for war crimes against surviving members of the military, political, and economic leadership of Nazi Germany, held in the Palace of Justice, Nuremberg, after World War II from 1946 to 1949 following the Trial of the Major War Criminals before the International Military Tribunal (IMT).
The film depicts the trial of certain judges who served before and through the Nazi regime in Germany, and who either passively; actively; or in a combination both, embraced and enforced laws, which led to the judicial acts of sexual sterilization, imprisonment or execution of men and women for their religions, their racial and ethnic identities; for their political beliefs; or even for the state of their physical handicaps or disabilities.
The film was inspired by the Judges' Trial before the Nuremberg Military Tribunal in 1947, where four of the defendants were sentenced to life in prison. A key thread in the film's plot involves a "race defilement" trial known as the "Feldenstein case". In this fictionalized case, based on the real life Katzenberger Trial, an elderly Jewish man was tried for a relationship with an "Aryan" (German) woman that became legally defined as "crime" under the Nuremberg Laws, and put to death in 1935. Using this, and other examples, the movie explores and wrestles with issues of personal conscience, responsibility in the face of unjust laws and personal behavior in the face of widespread societal immorality.