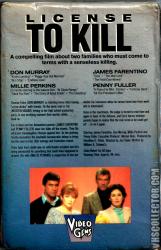 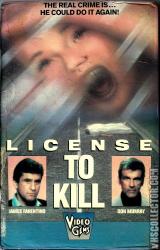 Additional Information
The real crime is he could do it again.


License to Kill is a serious TV movie dealing with the subject of drunken driving. The film begins when a popular high school girl is killed in a head-on collision by inebriated-businessman Don Murray. Though he's had a drinking problem for some time, Murray has dismissed it as a byproduct of the tensions of his job. Facing a manslaughter charge, the well-heeled Murray hires an expensive defense team....while the father of the dead girl (James Farentino), with hardly a penny to his name, is doggedly determined to see that Murray pays for his misdeed to the fullest extent of the law. The conflicting personalities of the two men are counterpointed by the anguish experienced by their wives (Millie Perkins and Penny Fuller). Written by William A. Schwartz, License to Kill debuted on January 10, 1984.

n this companion piece of sorts to "M.A.D.D.: Mothers Against Drunk Drivers," James Farentino and Penny Fuller are a married couple whose college-bound daughter is killed in an automobile accident with a drunk driver (Don Murray), who had a few drinks too many with his country club cronies.
Related Links
Pittsburgh Gazette pg 10
Entertainment 360
Review
Video Clip: Opening