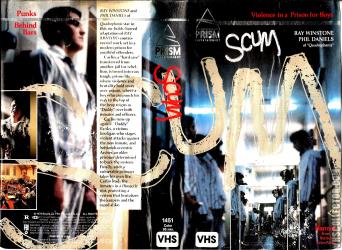 Additional Information
The film they tried to ban! A brutal story of today.

Scum refers to the label slapped upon reform-school inmate Ray Winstone. Such reformatories are called "borstals" by the British. When he isn't being beaten up by the other boys, Ray is being beaten down by The System. He rebels against this treatment and "wins" by becoming more vicious than any of his oppressors. Scum was originally filmed for British television, but rejected because of the bleakness of its outlook. In America, it went straight into theatres, where audiences had to strain to comprehend the "punk" jargon and thick provincial accents.

Scum is a 1979 British crime drama film directed by Alan Clarke, portraying the brutality of life inside a British borstal. The script was originally made for the BBC's Play for Today strand in 1977, however due to the violence depicted, it was withdrawn from broadcast.[2] Two years later, director Alan Clarke and scriptwriter Roy Minton remade it as a film, first shown on Channel 4 in 1983.[2] By this time the borstal system had been reformed and eventually allowed the original TV version to be aired.

The film tells the story of a young offender named Carlin as he arrives at the institution and his rise through violence and self-protection to the top of the inmates' pecking order, purely as a tool to survive. Beyond Carlin's individual storyline, it is also cast as an indictment of the borstal system's flaws with no attempt at rehabilitation. The warders and convicts alike are brutalised by the system. The film's controversy was derived from its graphic depiction of racism, extreme violence, rape, suicide, many fights and very strong language.[3]

Scum would be one of the most controversial British films of the early 1980s, but has since become regarded as a popular classic.

Three young men arrive at Borstal by prison van: Carlin, who has taken the blame for his brother's theft of scrap metal; Angel for stealing a car; and Davis, sent here after escaping from an open institution. All three are allocated to their rooms; Angel and Davis sent to private rooms, and Carlin sent to a dormitory.

Carlin wants to keep a low profile, having been transferred for assaulting a warder. He meets and befriends Archer, an eccentric and intellectual inmate intent on using non-violent means to cause as much of a nuisance to the staff as possible, and is informed his reputation is already known; Banks, the current "Daddy" (the inmate who "runs" the Borstal) is seeking Carlin for a fight.

Carlin struggles to settle into the dormitory, and after having watched the timid and bullied Davis be attacked by Banks, is eventually beaten by Banks and his friends in an unprovoked attack.

Carlin eventually gets his revenge on Banks. In the film's iconic scene, he uses a makeshift cosh from a long sock with two snooker balls inside to beat Banks's crony, then confronts Banks in the bathroom and replaces him as the "Daddy" of the ward. Carlin later acquires power over the adjacent wing of the borstal by administering a vicious beating to the adjacent wing's Daddy.

Life improves for the inmates under Carlin, with victimisation of younger, weaker prisoners prevented, along with racially-motivated violence. Carlin gains status with the warders. He persuades them to move him from the dormitory to a single cell in return for an agreement to be responsible in his status as a "natural leader". Goodyear offers Carlin a position of leadership in the borstal to help him develop his leadership skills.

Toyne learns through a letter from his in-laws that his wife has died, and sinks into despair, eventually slashing his wrists. After being moved to another prison, word reaches the inmates that he has killed himself in a second suicide attempt. Davis, meanwhile, is framed for theft by Eckersley and placed on report. Carlin advises Davis to avoid them; but Davis is subsequently gang-raped by three youths in a potting shed. This is seen by warder Sands who merely smiles at the rape. Davis slips into despair, and kills himself when he slashes himself in his cell at night. Whilst bleeding to death, he presses the button in his cell for help, but is ignored by warder Greaves.

Davis’ suicide causes mass hysteria within the prison, with the inmates refusing to eat their food at dinner. Carlin initiates a full-scale riot in the dinner hall. Carlin, Archer and Toyne's friend Meakin are shown being dragged bleeding and unconscious into solitary confinement. The Borstal's Governor later informs them the damage to the dinner hall will be repaid through lost earnings. The film ends with The Governor declaring a minute's silent prayer for Davis and Toyne.