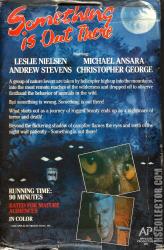 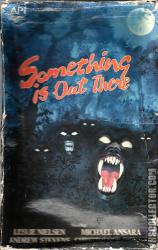 Something Is Out There

Additional Information
A shocking vision of things to come...

For centuries they were hunted for bounty, fun and food... now it's their turn

The terrifying movie of a world gone mad!

This little girl has seen it... and she will never be the same again... She lived through the Day of the Animals!


Something Is Out There....something so evil it paralyzes the soul.

There's no place to hide on...The Day of the Animals

An interesting low-budget entry in the post-Jaws animals-run-amok genre (which also owes more than a little to Hitchcock's The Birds), this noisy, violent thriller features the prophetic premise of a widening gap in the ozone layer (thanks to human indulgences in hairspray and other aerosol products) which unleashes brain-frying radiation and causes assorted woodland creatures to go for the throats of unsuspecting Sierra backpackers. As if that weren't horrific enough, the poor kids are also placed in the position of defending themselves against a rampaging Leslie Nielsen -- whose hammy performance will probably have fans of the Naked Gun series and their ilk waiting for a punch line that never arrives. Perennial B-movie couple Christopher George and Lynda Day George round out the cast. Day of the Animals is also known as Something Is out There.


A battle for survival begins as a group of mountain hikers in Northern California encounter a chemically imbalanced forest. The recent depletion of the Earth's ozone layer causes the sun to shine powerful ultraviolet light carrying some kind of solar radiation that somehow causes all animals above the altitude of 5,000 feet to run amok and kill, which is very unfortunate for a group of hikers (including Christopher George, Lynda Day George, and Leslie Neilsen) who get dropped off up there by helicopter just before a quarantine is announced for all the surrounding towns. This has a dramatic effect on the rest of the nation, turning common household pets and pests into vicious attackers.
Over the course of the movie, multiple wild and dangerous animals stalk and attack the hikers, and eventually start picking them off. These include a Mountain Lion, a Grizzly Bear, a pack of Wolves and several Birds of Prey (Hawks, Falcons, Eagles and Owls).
One of the hikers, Paul Jenson (Leslie Neilsen) goes mad as he is one of the very few humans to be exposed to the solar radiation making all the animals mad, and he eventually attacks the group, killing one of them. He finally takes on a grizzly bear and is killed by a bite to the neck.
The others manage to get below the 5,000 foot "radiation zone" area until they are trapped by several German Shepherds in an isolated cabin. Two of the hikers are killed by the vicious canines and the last three of the group members escape on a raft in a nearby river. They are rescued the next day as they float down river to a Park Rangers station.
The next day, groups of U.S. Army troops, wearing radiation suits and armed with flame-throwers and various automatic weapons, arrive to secure the areas. By then almost all the animals that went mad are killed by the very same solar radiation that drove them mad in the first place. This implies that life for humans will return to normal fairly soon and the carnage will finally be over. At the end of the movie, a surviving hawk lunges at the screen just before the credits roll.

The true sequel to Grizzly in both form and subject matter, only this Montoro production sputters to a disappointing conclusion. The story is a cross between Alfred Hitchcock's The Birds and The Poseidon Adventure. A hole in the ozone layer drives forest animals berserk in Northern California, and a group of vacationing hikers is caught in the fray. The group includes an Indian, a geeky professor, a handicapped man (!?!), and a weepy blonde babe. Christopher and Linda Day George star as the folks you're supposed to be rooting for. In a most unusual role, Leslie Nielsen plays an asshole, racist, big-shot businessman who rapes a nubile hiker while suffering from ozone-born madness.

Nearly all of the cast members are killed by way of rat, dog, hawk, snake, or mountain lion. Girdler didn't film the real critters in this 1977 release much better than he filmed the plastic critters for Asylum of Satan. The animals are rarely terrifying but they're fun to watch in action. The best scene by far is the one in which a crazed Leslie Nielsen suicide-wrestles a grizzly bear, with the famous "flying rats" scene ranking as a close second.

When asked what it felt like to take on a grizzly bear, Leslie Nielsen told Kevin Danzey in 1980, "I had to weave and play around with a honey bear, and I could wrestle with him a little bit, but there's no way you can even wrestle a honey bear, let alone a grizzly bear that's standing ten feet to eleven feet tall! Can you imagine? But it was fascinating to work that close to that kind of animal."

The movie runs out of steam and ends abruptly, though the gem Nielsen moments (along with the film's breezy pace) make Day of the Animals a highly enjoyable 70s horror entry. Girdler's relationship with Montoro disintegrated during the making of the film, and the two parted when production ended. Montoro re-released Day of the Animals in 1978 as Something Is Out There.