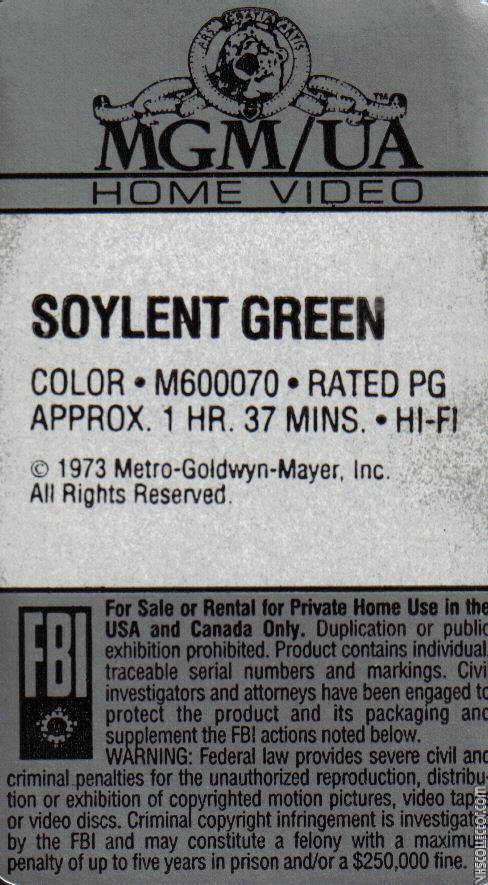 Additional Information
There aren't any trailers on this release.

What is the secret of Soylent Green?

It's the year 2022... People are still the same. They'll do anything to get what they need. And they need SOYLENT GREEN.

Richard Fleischer directed this nightmarish science fiction vision of an over-populated world, based on the novel by Harry Harrison. In 2022, New York City is a town bursting at the seams with a 40-million-plus population. Food is in short supply, and most of the population's food source comes from synthetics manufactured in local factories -- the dinner selections being a choice between Soylent Red, Soylent Yellow, or Soylent Green. When William Simonson (Joseph Cotten), an upper-echelon executive in the Soylent Company, is found murdered, police detective Thorn (Charlton Heston) is sent in to investigate the case. Helping him out researching the case is Thorn's old friend Sol Roth (Edward G. Robinson, in his final film role). As they investigate the environs of a succession of mad-from-hunger New Yorkers and the luxuriously rich digs of the lucky few, Thorn uncovers the terrible truth about the real ingredients of Soylent Green.

Soylent Green is a 1973 American science fiction film directed by Richard Fleischer and starring Charlton Heston, Leigh Taylor-Young, and, in his final film, Edward G. Robinson. The film combines the police procedural and science fiction genres, depicting the investigation into the murder of a wealthy businessman in a dystopian future suffering from pollution, overpopulation, depleted resources, poverty, dying oceans, and all year humidity due to the greenhouse effect. Much of the population survives on processed food rations, including "soylent green".

The film, which is loosely based upon the 1966 science fiction novel Make Room! Make Room! by Harry Harrison, won the Nebula Award for Best Dramatic Presentation and the Saturn Award for Best Science Fiction Film in 1973.

The film was released April 19, 1973.[6] TIME called it "intermittently interesting"; they note that "Heston forsak[es] his granite stoicism for once" and assert the film "will be most remembered for the last appearance of Edward G. Robinson.... In a rueful irony, his death scene, in which he is hygienically dispatched with the help of piped-in light classical music and movies of rich fields flashed before him on a towering screen, is the best in the film."[7] New York Times critic A.H. Weiler wrote "Soylent Green projects essentially simple, muscular melodrama a good deal more effectively than it does the potential of man's seemingly witless destruction of the Earth's resources"; Weiler concludes "Richard Fleischer's direction stresses action, not nuances of meaning or characterization. Mr. Robinson is pitiably natural as the realistic, sensitive oldster facing the futility of living in dying surroundings. But Mr. Heston is simply a rough cop chasing standard bad guys. Their 21st-century New York occasionally is frightening but it is rarely convincingly real."[6]