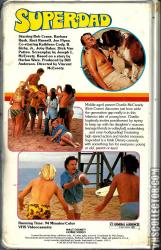 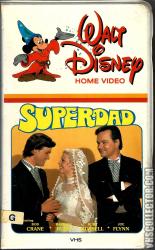 Additional Information
Young love is making waves...and Dad's about to get beached!

Young love takes the helm... and DAD FLIPS OUT!

A concerned father decides to become closer to his daughter the hard way in this live-action comedy from Walt Disney Pictures. Charlie McCready (Bob Crane) is the father of Wendy (Kathleen Cody), a pretty teenager soon to enter college. Like most parents, Charlie only wants the best for his daughter, but he has little use for her circle of friends, most of whom he regards as half-witted and lazy. Determined to set a better example for his daughter (especially since most of her friends will be joining her at college), Charlie decides to become Wendy's new best friend, imposing himself upon her as often as possible and shoe-horning his way into her social circle, even if it means taking up surfing and water skiing to do it. Charlie's not-always-welcome presence doesn't change Wendy's feelings about her boyfriend Bart (Kurt Russell), but when Charlie decides to break up their romance, he gets even more trouble than he anticipated. Superdad also stars Barbara Rush as Charlie's wife Sue, and Joe Flynn as the memorably named Cyrus Hershberger

This film was an attempt by the Disney company to address the generation gap and the social upheaval of the Vietnam era, but it was a critical and commercial failure.

Charlie McCready (Bob Crane) tries to wrest his daughter Wendy (Kathleen Cody) from her childhood friends, whom he believes have no ambition. He especially disapproves of her boyfriend, Bart (Kurt Russell). Initially he makes a few attempts to bridge the generation gap, but he fails. Late in the summer, Wendy receives a letter informing her that she's won a full scholarship to her parents' alma mater, Huttington College. Unbeknownst to her, the letter is fake; her father has paid the first year's tuition himself, and had a friend at the college send the letter to her. He did this so Wendy would not attend City College with Bart and her other friends.

Charlie later visits Wendy at Huttington, and discovers that the college has changed considerably since he attended there. Wendy later discovers his plot, and joins the campus counterculture as a way of getting even. She inadvertently becomes engaged to a hippie artist named Klutch. Charlie attempts to intervene on her behalf, and ends up in a fistfight with Klutch. Fortunately, Wendy's boyfriend Bart comes to the rescue. At this point, Charlie learns that Bart had turned down a scholarship to Huttingdon so he could be near Wendy. The movie ends with Wendy's marriage to Bart.

Charlie McCready is a worried father. His daughter, Wendy will be attending college in the fall, and he feels the crowd she's hanging out with has no ambition, especially her boyfriend, Bart. He knows that Wendy's friends will all be attending the same college, so, he concocts a plan where Wendy will recieve a scholarship to a different college. This college being the same one where his wife attended. All goes as planned. Wendy attends Huttington and sees less of her old crowd. Soon Charlie's plan backfires, Wendy discovers her fathers scholarship plan and becomes rebellious. When she starts dating a hippie artist, Charlie realizes he has made a big mistake and must do something before Wendy goes too far.