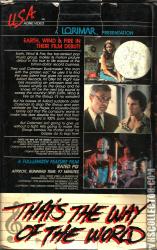 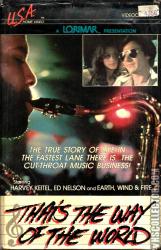 That's the Way of the World

Additional Information
Simple truths for the ways of the world.
The top-selling Grammy-winning album of 1975 brought to you by Earth, Wind & Fire and its founder/writer/producer Maurice White is now a motion picture of all sorts.

There are two sides to every hit record!

Where were you when the stardust hit the fan?

This cult favorite from director/producer Sig Shore featured the music of Earth, Wind and Fire and had a #1 soundtrack album, but went belly-up at the box-office. That's a shame, because what other film offers viewers Harvey Keitel as a record producer who skates at an all-black disco rink, Bert Parks as a child molester, and squeaky-clean singer Jimmy Boyd ("I Saw Mommy Kissing Santa Claus") as a hardcase junkie? Other treats on hand include the manager of a Christian pop band threatening to stick an ice pick in Keitel's ear and appearances by noted disc jockeys Murray the K and Frankie Crocker. Amidst all of this insanity, Cynthia Bostick's female-lead turn as a Joplin-like junkie singer named Velour is lost. The film ends with a number of Earth, Wind and Fire songs, but by that point most viewers will be in bad-movie shellshock.

That's the Way of the World is a 1975 film produced and directed by Sig Shore, starring Harvey Keitel, and features the music of R&B/Funk group Earth, Wind and Fire (who also appear in the picture as a fictionalized version of themselves). The film depicts the music business and the life of record executives. A soundtrack by Earth, Wind and Fire released in the same year eventually became one of the group's landmark albums.

Coleman Buckmaster (Harvey Keitel) also known as "the Golden Ear" is a producer extraordinaire for A-Chord Records. In the midst of working slavishly to complete the debut album of "the Group" (Earth, Wind and Fire), Buckmaster is forced to put their project on the back-burner in favor of a new signing to A-Chord, "the Pages," Velour (Cynthia Bostick), Gary (Jimmy Boyd) and Franklin (Bert Parks). According to label head Carlton James (Ed Nelson), the Pages represent good, ol' fashioned, wholesome family values. According to Buckmaster, they represent everything wrong with the music business: a soulless pastiche of cheese-on-white-bread, and he wants nothing to do with them. However, due to his contract, he is forced to turn the flat song of their demo, "Joy, Joy, Joy" into a workable hit. In the meantime, he ends up in a relationship with Velour, seemingly also against his will, but he is able to use the relationship to his and the Group's advantage.