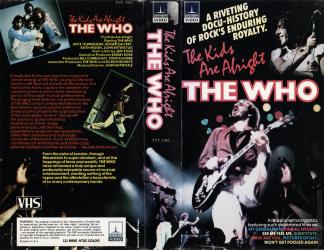 The Who: The Kids Are Alright

Additional Information
The classic rock group The Who are featured in this 1979 documentary about the career of the group. It is enhanced by rare footage of the performers, including a television interview with the later-deceased Keith Moon. Highlights include footage from many of the band's early performances. Among the many songs featured are "Magic Bus," "Won't Get Fooled Again," "My Generation," "Young Man's Blues," "Happy Jack," and excerpts from the innovative rock-opera Tommy.

The film was primarily the work of American fan Jeff Stein who, despite having no previous experience in filmmaking, convinced the band to support the project and served as the film's director. Stein had produced a book of photographs from the band's 1970 tour when he was just 17. In 1975, he approached Pete Townshend, The Who's principal composer and lead guitarist, about compiling a collection of film clips to provide a historical reference for the band's fans. Townshend initially rejected the idea, but was persuaded by the group's manager, Bill Curbishley, to give their cooperation.
When Stein and his film editor, Ed Rothkowitz, soon previewed a 17-minute compilation of clips from their US television appearances to the band and their wives, they could hardly believe the reaction. "Townshend was on the floor, banging his head. He and Moon were hysterical. Daltrey's wife was laughing so hard she knocked over the coffee table in the screening room. Their reaction was unbelievable. They loved it. That's when they were really convinced that the movie was worth doing."
Stein knew that many of the band's best performances and most memorable moments had either never been recorded or been lost, erased or discarded. For more than two years, he collected film, television and fan film footage in England, the United States, Sweden, Germany, France, Australia, Norway and Finland, in some cases actually rescuing footage from the trash. Nevertheless, there were gaps in the depiction of the band's catalog and persona that required the shooting of new material. This began on 20 July 1977 at Shepperton Studios in Middlesex, England with the playing of the song "Barbara Ann" at Stein's request. The film crew then spent five days chronicling the daily life of drummer Keith Moon at his Malibu, California home, including his 31st birthday party. Finally, Stein attempted on several occasions to record performances of songs that were not covered by the archival footage, particularly "Baba O'Riley" and "Won't Get Fooled Again". The final recordings were made on 25 May 1978, but unfortunately, most of the original reels of this show were lost. A version of "My Wife" was recorded at the Gaumont State in Kilburn in December 1977, and, although not included in the film, it appeared on the soundtrack album.
The sound editing was supervised by bassist John Entwistle and, with the exception of a 1965 performance of "Anyway, Anyhow, Anywhere" where Entwistle had to replace a missing bass track, and the footage of Moon smashing a drum kit - as the original 8mm footage was silent, Moon overdubbed drum sounds - most of the sound was authentic. Entwistle did fight for - and won - getting him and Pete to overdub their backing vocals on the Woodstock footage because Entwistle deemed the original gig's backup vocals "dire." During the process of sound editing, on 7 September 1978, Keith Moon died. All of the band members except Townshend had seen a rough cut of the film just a week before and, after Moon's death, they were determined not to change anything.
The film premiered at the Cannes Film Festival on 14 May 1979. The Who promoted the release of the film with some live performances with their new drummer, former Small Faces and Faces drummer Kenney Jones.
An album was released as a soundtrack in June 1979 that included some songs and performances from the film. The album reached #26 in the UK, and fared better in the US where it peaked at #8 on the Billboard album charts and went Platinum.