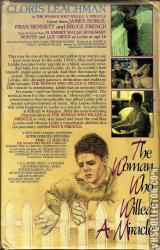 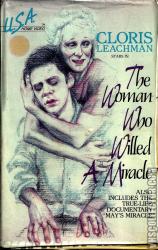 The Woman Who Willed a Miracle

Additional Information
One of the most famous of all ABC Afterschool Specials, The Woman Who Willed a Miracle is the true story of two remarkable people. Cloris Leachman stars as middle-aged Wisconsin nurse May Lemke, who adopts a six-month-old boy named Leslie and brings him into her family. Abandoned as an infant, Leslie is blind, severely retarded, and suffers from cerebral palsy. Against all odds, May raises Leslie in as "normal" a manner as possible, teaching him to dress and feed himself. Unfortunately, she is unable to get him to speak or respond to intellectual stimuli -- until, at age 16, Leslie (played as a teenager by Leif Green) listens to a televised classical-music concert, sits down at the family piano, and replays the entire concert from memory, every note to perfection! Remaining sightless, mentally challenged, and essentially nonverbal, Leslie gains worldwide fame as the quintessential "savant," flawlessly playing complicated piano compositions and singing along as he goes...with the recorded works of his musical idol Liberace as his primary inspiration. The winner of several Emmys and innumerable other industry awards, The Woman Who Willed a Miracle was executive produced by Dick Clark.

Produced and directed by Sharron Miller and written by Arthur Heinemann, it tells the extraordinary true story of Leslie Lemke, a blind, mentally retarded boy with cerebral palsy who was raised from infancy by a foster mother who stubbornly refused to let him die. Because of her love and dedication, he not only survived but was discovered to be a musical savant.