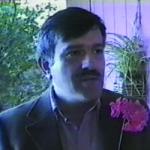 About Me
Collecting VHS tapes is somewhat of a recent endeavor for myself. It all started after visiting a small local record store. On the second floor of the shop it had rows of old VHS tapes, movies I have never heard off, covers so intriguing that I couldn't pass them up. I bought a handful of them due to there unique artwork. After watching them, I realized something, only a small percentage of people have probably ever watched these movies. From that day forward I have been collecting the most obscure films, ones that would surely be lost with time with an effort to preserve these strange, wacky, creepy, obscure films so that one day, another generation will get to see them.