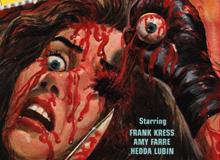 Summary
Back when I created the first version of this site, SlasherIndex.com, I had a blog where I posted several articles related to home video. This was the first of those articles, published over 10 years ago in 2008! Has much changed in the collecting community? You decide!
Body

Here's the first entry among many that will be dedicated to the glorious horror VHS. And as a first in the blog entries, I dedicated this one to the top 14 most sought after horror VHS's. The list is compiled from not only personal experience, but also with the help of fellow collectors. The criteria for entering the list is as the title suggests, the most wanted by the collector. Factors such as rarity or current market value weren't considered too much in the making the choices, although you may find they do relate. Of course there are other films that may compete with the ones I have listed here, but this is just a basic rundown. Enjoy the mayhem!

The name says it all. Strangely enough, many people, horror or not, know of this films existence. Not because they've seen it, but because its a title they've seen somewhere that they'll never forget. Attack of the Killer Refrigerator was probably the very first VHS I had hunted down. Why? It's obscurity and provocative name excited me. With a comic book caption bubble like "Oh No! I just hate cold cuts!" next to an image of a girl being shut in the door of refrigerator, its hard not to want this in your collection. Sure the movie is only 16 minutes, but the feature after it is definitely a treat, and the behind the scenes featurette after that is probably one of the first for an obscure video release such as this.

Even though the Wizard line of big boxes are one of the most common, they're highly sought after. One of the most yearned for big boxes from the line (perhaps alongside with Zombiethon) is Fulci's Zombie. It's one of the few artworks among the Wizard line that includes a screenshot from the film (adapted from the theatrical poster). Not only is the film a cornerstone in Italian gore cinema, but the artwork represents the real horror contained on the videocassette, maggots and all.

Maybe one of the most difficult SOV films to find on VHS, 555 is an independantly distributed homemade trash masterpiece of slasher proportions. But more stimulating than the movie itself is of course the artwork. 555 just may be the only horror VHS packaged in a bright hot-pink slipcase. But if that doesn't already make this a unique release, it has a screenshot of man being decapitated with a machete, a direct screenshot of the movie. Somehow, this odd combination of decapitations and hot pink makes this a necessary addition to any VHS collection!

Alright, so there isn't just one title here, but its hard to separate these. The Comet line (sub-label to Continental Video) aren't too rare due to their mass distribution in the 80's, but because of their big box format and gruesome artwork, they're necessary. The 3 films include Blood Feast, 2000 Maniacs, and Color Me Blood Red. While 2000 Maniacs isn't too gruesome, the other two are and hard to forget. The artwork for Color Me Blood Red is brilliant and makes you respect the video stores with the balls to display these boxes.

Here we have another rare Continental release. Well, maybe its no so much rare as it is wanted. Nightmare is one of those classic 80's slasher flicks that have yet found its way to the digital age here in the U.S. (although it will be coming soon!) But besides being one of the premiere slasher flicks in the 80's, the masterminds at Continental Video gave this release the same treatment as the Comet releases of the Lewis films. Take the most disturbing screenshot of the film and slap it on a big box! Here, its a man towering over a girl, pressing a knife against her throat. Of course we know whats going to happen next, making this misogynistic (not dissing it) artwork shocking.

I've been trying to get my hands on this VHS for years, and the few times it does appear on eBay, the price goes far beyond what I'm willing to pay for a VHS. Spine is your basic slasher flick shot on video by a pornography team attempting to become mainstream. The artwork is very slasher-esque, with a man approaching a girl in distress with a knife. Like 555 it was distributed independently on a separate label than the porn films, which adds to it's scarcity (I'm assuming since there is no record of any other SS Video releases). Don't be fooled by the DVD release on Amazon.com, its a highly priced poor transfer which is probably unauthorized.

Of the two pinnacle cannibal films to come from the homeland of my ancestors, Cannibal Ferox was the only one to make it to the US in a legitimate VHS release (Cannibal Holocaust was released theatrically, but never to VHS). Thriller Video had the balls to present a film containing rape, animal mutilations, and of course castrations to the American audience. The film was so shocking that Elvira allegedly refuse to host the film like she had been contracted to do with many of the other Thriller releases. Why is this film so sought after? Well besides the artwork, its a combination of the infamous Thriller name and the extreme cannibal mayhem.

7. Screams of a Winter Night (VCI)

I'm assuming that by looking at the artwork for this video, its not the reason this film is so desired. It's neither gruesome nor big. Just an image of a creature's back in a darkened forest. This video floats in the same boat as Don't Be Afraid of the Dark. It has a strong following from those who remember its release at the drive in decades ago and refuse to forget about it. And because its only been released twice, once by VCI (a company that's already somewhat scarce on its own) it's pretty tough to find. It's been sold on eBay for more than 100 bucks!

According to IMDb.com, Tapeworm released a bunch of stuff, most of which I've never heard of or there might even be a confusion on IMDb between two companies by the same name. Regardless, a distributor with the name of Tapeworm suits distributing a film of the name of Lunch Meat. But perhaps more interesting than the name itself is the gruesome artwork, in the same vain as 555. Although not in a hot pink slipcase, it makes up for that being in the big box format. On the cover is the vivid image of a bloodied maniac holding a severed arm. It's gruesome, big, and wanted! The film may be bad, but the video is a must!

The artwork for this VHS is simply brilliant. Leave it to an H.G. Lewis film to have such glorious VHS releases! It depicts a leather-gloved man carving out a girls eye with a knife. Need I say more? Midnight also released some great artwork for several other Lewis films, such as the Gruesome Twosome and Wizard of Gore, but neither top the beauty of this one! The movie itself may lack, but this is yet another one of those situations where it matters not how good the film is, its all about the art.

What makes this film so yearned for? It most likely has to do with the cult status it received in the 70's as a TV movie. As that generation grew older and sought after their childhood roots, they added this film to the list. U.S.A. Home Video was the only distributor to release this film (officially) and remains to be to this day. If you're looking for a legit release , this would be the one to look for, but beware, you'll have to compete with the VHS collectors to get it! Luckily I got mine in brilliant condition for only a dollar at a flea market, while on ebay it could go for as much as $70. Miracles do happen :)

Yet another Donna Michele release enters out list! This time, its perhaps the rarest of their releases. The movie itself seems to be shot on 8mm (maybe 16?), not on video, which may be suggested by the other Donna Michele releases. It's got gore, bad acting, and silly editing. So why is it people want this VHS? I have no idea! The artwork isn't too interesting and it comes with a simple slipcase. I think this is one of those situations where is wanted only due to its rarity, and the added gore is a plus. It may also be desired by those looking to complete their collection of Donna Michele releases. I got mine in near-mint condition for less than a dollar in a lot of 90 tapes, while a friend of mine got lucky and found it in a lot on eBay, and was able to make an offer of 20 bucks to the seller. These cases are pure luck, but if you find the VHS being auctioned off on eBay by itself, be prepared to pay over 70 bucks for it!

Released back when Media Home Entertainment was called Meda (founder Charles Band's ex-wife), this VHS is yearned for by not only the horror VHS collector, but collectors across all genres! This video is so incredibly rare, that auctions will reach more than 70 dollars for it. Now I don't know too much about the film itself, except that I believe it was released only that one time. But the truth about why its wanted has to do somewhat with it's historical status as being released in the late 70's with the original Meda name. This was one of the very first releases by a company that would soon become a video giant in the 80's.

The holy grail of the horror VHS collecting world. Recently, a copy of this film in its unusual plain black slipcase format went for over 200 bucks on eBay! (I find anyone willing to spend 200 bucks on a VHS more disturbing than the film itself!) The artwork isn't anything special, just a miniature theatrical poster. It's really beyond me why this VHS is so sought after. The movie is available on DVD and the artwork as I mentioned isn't anything special. I can only assume that it simply has to do with its rarity and maybe its small cult following. The unusual pasted on artwork is a plus, making the packaging itself unique.