History / Information
Incorporation filed by LEON SMALL in California State on 12/22/1989. Their first release was Concrete Cowboys;[3] almost immediately, their infamy as a video distributor began, with habits such as using older VHS versions or TV edits of films as masters for their tapes and retitling films (Concrete Cowboys, for example, was retitled Ramblin' Man[3][dead link]), often in a rather cheesy manner. They are best remembered for releasing their own pseudo-sequels to Zombi 2 and Captive Women; they also distributed Jackie Chan films, exploitation films, grindhouse films, Eurohorror films, Bruce Lee films, Spaghetti Westerns, and Emmanuelle copycats.[2] They were the subject of a lawsuit filed by United States Media Corp. in the United States District Court for the Southern District of New York, in which it was found that "the weight of authority indicates that the 'full costs' referred to in the Copyright Act are nothing more than the costs allowable under 28 U.S.C. § 1920".[4] It went out of business by the end of the decade. Among their subsidiaries were T-Z Video, Ace Video, and High Desert Films. https://en.wikipedia.org/wiki/Edde_Entertainment 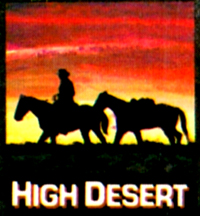