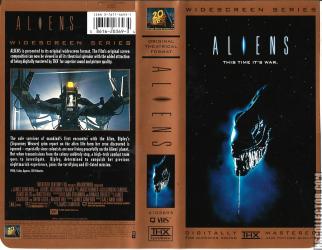 This time it's war

The bitch is back.


Big-budget special effects, swiftly paced action, and a distinct feminist subtext from writer/director James Cameron turned what should have been a by-the-numbers sci-fi sequel into both a blockbuster and a seven-time Oscar nominee. Sigourney Weaver returns as Ellen Ripley, the last surviving crew member of a corporate spaceship destroyed after an attack by a vicious, virtually unbeatable alien life form. Adrift in space for half a century, Ripley grapples with depression until she's informed by her company's representative, Carter Burke (Paul Reiser) that the planet where her crew discovered the alien has since been settled by colonists. Contact with the colony has suddenly been lost, and a detachment of colonial marines is being sent to investigate. Invited along as an advisor, Ripley predicts disaster, and sure enough, the aliens have infested the colony, leaving a sole survivor, the young girl Newt (Carrie Henn). With the soldiers picked off one by one, a final all-female showdown brews between the alien queen and Ripley, who's become a surrogate mother to Newt. Several future stars made early career appearances in Aliens (1986), including Lance Henriksen, Bill Paxton, and Reiser.


Aliens is a 1986 American science fiction action horror film directed by James Cameron and starring Sigourney Weaver, Carrie Henn, Michael Biehn, Lance Henriksen, William Hope, and Bill Paxton. It is the sequel to the 1979 film Alien and the second installment of the Alien franchise. The film follows Weaver's character Ellen Ripley as she returns to the planet where her crew encountered the hostile Alien creature, this time accompanied by a unit of Colonial Marines.

Aliens' action-adventure tone was in contrast to the horror motifs of the original Alien. Following the success of The Terminator (1984), which helped establish Cameron as a major action director,[5] 20th Century Fox greenlit Aliens with a budget of approximately $18 million. It was filmed in England at Pinewood Studios and at a decommissioned power plant in Acton, London.

Aliens grossed $86 million at the U.S. box office during its 1986 theatrical release and $131 million worldwide.[6] The movie was nominated for seven Academy Awards, including a Best Actress nomination for Sigourney Weaver. It won in the categories of Sound Effects Editing and Visual Effects. It won eight Saturn Awards, including Best Science Fiction Film, Best Actress for Weaver and Best Direction and Best Writing for Cameron

Test and pre-screenings were unable to take place for Aliens due to the film not being completed until its week of release.[28] Once it was released in cinemas, critical reaction was very positive. Critic Roger Ebert gave the film 3.5 stars out of 4 and called it "painfully and unremittingly intense" and a "superb example of filmmaking craft." He also stated "when I walked out of the theater, there were knots in my stomach from the film's roller-coaster ride of violence."[29] Walter Goodman of The New York Times said it was a "flaming, flashing, crashing, crackling blow-'em-up show that keeps you popping from your seat despite your better instincts and the basically conventional scare tactics."[30] Time Magazine featured the film on the cover of its July 28, 1986, issue, calling it the "summer's scariest movie". Time reviewer Richard Schickel declared the film "a sequel that exceeds its predecessor in the reach of its appeal while giving Weaver new emotional dimensions to explore."[13] The selection of Aliens for a Time cover was attributed to the successful reception of the film,[31][32] as well as its novel example of a science fiction action heroine.[33][dead link] Echoing Time's assessment, Dave Kehr of The Chicago Reader called the film "one sequel that surpasses the original."[34] Gene Siskel gave the film a negative review, describing Aliens as "one extremely violent, protracted attack on the senses" and that "toward the end, the film resorts to placing a young girl in jeopardy in a pathetic attempt to pander to who knows what audience. Some people have praised the technical excellence of Aliens. Well, the Eiffel Tower is technically impressive, but I wouldn't want to watch it fall apart on people for two hours."[35]

Sigourney Weaver's Academy Award nomination for Best Actress was considered a milestone at the time when the Academy gave little recognition to the science fiction genre.
Reviews of the film have remained mostly positive over the years. In a 1997 interview, Weaver stated that Aliens "made the first Alien look like a cucumber sandwich."[36] In a 2000 review, film critic James Berardinelli said "When it comes to the logical marriage of action, adventure, and science fiction, few films are as effective or accomplished as Aliens."[37] Austin Chronicle contributor Marjorie Baumgarten labeled the film in 2002 as "a non-stop action fest."[38] Based on 48 reviews, the film holds a "Certified Fresh" rating of 98% on Rotten Tomatoes with an average critic score of 8.8 out of 10.[39] It also holds a score of 87 out of 100 ("universal acclaim") on the other major review aggregator, Metacritic.[40]