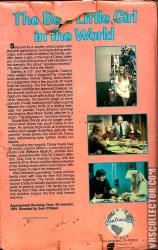 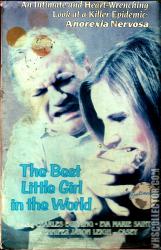 The Best Little Girl in the World

Additional Information
A drama of anorexia nervosa. A movie that just might save your child's life.
A young girl's dangerous dance with dieting leads to near disaster in this exceptional made-for-television drama. In one of the earliest treatments of the subject, Jennifer Jason Leigh stars as Casey Powell, the quiet daughter of an overbearing mother and milquetoast father. Feeling pressure to be the good girl of the family after her troublesome older sister gets pregnant, Casey retreats into her secretive world of self-starvation. When arguing fails to produce results, her parents (Charles Durning and Eva Marie Saint) send her to a hospital where she meets a spunky fellow patient (Melanie Mayron) and a caring therapist (Jason Miller). Casey's road to recovery is not as simple as merely eating though, and she and her family realize that together they must confront the deeply-rooted familial issues that lay at the heart of Casey's affliction. Jennifer Jason Leigh is utterly compelling in the lead role.

17-year-old Casey Powell is a shy teenager who gets good grades, loves sports and dancing, aspires to be a cheerleader and wants to dance professionally in ballet. Her parents, Frank and Joanne, give all their attention to her 19-year-old sister Gail, who just found out she is pregnant by somebody she has no interest in marrying. Frank is infuriated and Joanne is worried about Gail, so they forget to spend time with Casey- not a new thing as Gail has always been a problem child who got into trouble and argued with their father. The family think of Casey as the good girl who doesn't cause any trouble. Feeling ignored and after getting embarrassed at her cheerleading audition when one of the jocks makes sexual comments to her, Casey starts wanting to look like the girls on the covers of magazines and begins working out and dieting as well. At this time Eating Disorders were not well known about and treatment was in the very early stages, usually focusing on forced feeding if it was known about at all. Little was known about the psychology of the illness.

Casey is noticed by her ballet teacher, Madame Seurat, who tells her she could be very good if she loses a few pounds- thinning then firming up. It doesn't take long before Casey becomes a starving anorexic who occasionally purges. She is surprised when her parents don't take her desire of professional dancing seriously since they put her into ballet classes as a child and have always wanted her to be able to dance well. Instead she now discovers they think she will graduate from high school, get a good job and then become a wife and mother despite Casey trying to inform them otherwise. Over the next two months, Casey becomes obsessed with dieting and improving in ballet. This causes her school work to deteriorate, which brings attention from her parents as does her remoteness around them and her disinclination to eat. Gail attempts to support Casey, asking her parents to stop pushing her but this simply causes more fights.

When her sister really sees how thin Casey is, she is horrified and warns her parents. Casey is sent to a doctor who orders her to start eating normally again, threatening to send her to a hospital if she doesn't. Despite the pressure, Casey is afraid to gain weight and continues her eating disorder secretly. When her parents discover diet pills, Frank tries to force her to eat, but she refuses to do so. When she returns home from a party where she felt totally out of place and miserable she tries to convince her parents that she ate at the party, but Frank isn't convinced and tries to shove a peanut butter sandwich in her mouth, but she bites his hand. In an attempt to mend things with her family, Casey makes them all breakfast and even eats with them but seems discouraged after her mother says she can no longer come to Casey's cheerleading performance as she needs to take Gail to a lamaze class and to pick out some baby things. After her parents take the diet pills and laxatives from her, Casey steals a package at the pharmacy the next day. However, she is caught and is arrested. After her parents bail her out, she collapses outside the police station and is taken to the hospital. She tries to run away, but collapses yet again outside the hospital and is taken back.

In the hospital, she befriends fellow patient Carol Link. Carol is also suffering from anorexia and bulimia and gives Casey advice about how to get kicked out of the hospital and also teaches her tricks to mislead the doctors. At one moment, Carol overdoses on pills and Casey witnesses her dying. Crushed and devastated, she runs away, but collapses for the third time. When she becomes conscious again, she is angry that she is back in the hospital. She tells her doctor, Clay Orlovsky, that she is afraid to die as well, but he assures her that is not going to happen as long as she starts being honest with him and working to get better. Dr Clay is a specialist in Eating Disorders and aspires to develop an effective treatment programme which works long term.

When Casey improves, she is finally allowed to see her family again. Dr. Orlovsky analyzes their meeting. Gail and her father argue, Joanne sits in between them as peacemaker and Casey sits in a corner and stays out of the way. He tells the family that he thinks Casey has developed an eating disorder because it seems to be the only way for her to get attention. Despite being a delight- good grades, good student, polite, pretty, dedicated, an excellent dancer- Casey has been ignored and sidelined in favour of Gail who is more outspoken and forthright. Her type A personality forces her to want to achieve perfection in everything, including Anorexia, and her problems with self-assertion mean she also wants to be able to control her food and eating because she feel out of control in real life.

After a while, Casey begins to recover and is released from the hospital. She doesn't want to leave, however, and feels safer with Dr. Orlovsky because her family is more of a threat

he film's reception was generally positive; in particular, Leigh was praised for her portrayal of a teenager.[6] The film gained attention again in 1983, when singer/drummer Karen Carpenter died of complications from anorexia nervosa.[7] Although the film was later released on VHS, the movie is now quite rare.[3]

The movie, however, received criticism for its portrayal of treatment for anorexia victims, which was thought to be unrealistic. Another criticism was that its plot differed too much from the nove