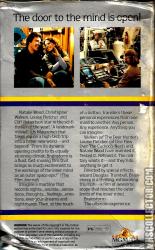 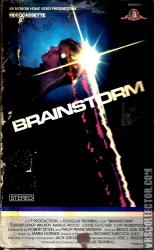 The door to the mind is open!

Natalie Wood made her last screen appearance in Brainstorm; in fact, she died before the film was completed, necessitating extensive rewrites. Wood's character is secondary to the one played by Christopher Walken. A research scientist, Walken has been experimenting with a revolutionary brain-reading device. This wondrous machine is able to read a person's thought processes and translate these to videotape. When Walken wants to study the brainwaves of his late partner Louise Fletcher, he finds himself seriously at odds with his superiors-not to mention several ominous-looking government types, headed by Cliff Robertson.

Brainstorm is a 1983 science fiction film directed by Douglas Trumbull and starring Christopher Walken, Natalie Wood, Louise Fletcher and Cliff Robertson. It was Wood's final film appearance, as she died during production, and was also the second and final major motion picture to be directed by Trumbull.
The film follows a research team's efforts to perfect a system that directly records the sensory and emotional feelings of a subject, and the efforts by the company's management to exploit the device for military ends.

Brainstorm was finally released on September 30, 1983, almost two years after Wood's death. However, it opened on a small number of screens and with little publicity, despite being trumpeted unofficially as "Natalie Wood's last movie". The film received mixed critical opinion, and review aggregator Rotten Tomatoes reports that 63% of 16 critics have given the film a positive review. [6] Janet Maslin of the New York Times gave particular credit to Louise Fletcher's "superb performance"[7]
The film was not a commercial success, with a production budget of $18 million[8] and grossing only $10 million in ticket sales in North America.[9]
Because of the immensely troubled production and disagreements with MGM, Trumbull opted never to direct a Hollywood film again. In 1983 he stated "I have no interest...in doing another Hollywood feature film...Absolutely none. The movie business is so totally screwed-up that I just don't have the energy to invest three or four years in a feature film. Moviemaking is like waging war. It destroys your personal life, too. The people who can survive the process of making films have largely given up their personal lives in order to do that, just because it's such a battle to make a movie. And in doing that, they've isolated themselves from the very audience that they're trying to reach.