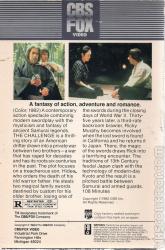 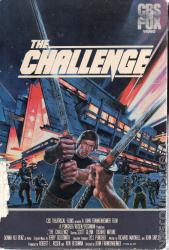 Additional Information
He has trained every thought, every muscle, every nerve, for the moment of truth!


The sword (one of a pair known as "The Equals") was a family heirloom, passed down through the generations, and had been lost during World War II. It was finally tracked down in California where Yoshiida's son, Toshio, finds it. He looks for someone to hire to act as a decoy in order to safely smuggle it into Japan, and back to its rightful owner, Yoshida-san. Rick Murphy (Scott Glenn) is contracted to smuggle a rare sword into Japan, only to find upon his arrival that it is a fake. Aggravated that he has been used as a decoy, he is faced with the prospect of being killed by Yoshida-san's (Toshirō Mifune) brother, Hideo. Instead, he is advised to infiltrate Yoshida's martial arts school and obtain the sword. He does so, yet finds himself being drawn into the ways of Japanese etiquette and tradition to the point where he returns the sword to Yoshida himself after having the perfect opportunity to escape with it. Murphy then humbly asks Yoshida-san if he can be forgiven and taken back in because he wants to learn the ways of Bushido. Yoshida agrees, but only if Murphy follows Yoshida's conditions.
Murphy continues to bumble his way through life at Yoshida-san's school until, after a treacherous and almost fatal attempt by one of the higher members of the school to steal the sword, he leaves and is found in a hotel in Kyoto by Akiko, Yoshida's only daughter. Finding romance, they go out to see the sights and sounds of the city, including watching a Shinto ceremony. During the hub-bub of the crowded parade, Murphy and Akiko gets separated and Hideo's henchmen kidnap her and deliver her to her uncle, Hideo. Yoshida-san, laden with ancient weaponry, ventures out to Hideo's industrial complex where he is shot and wounded by Ando (Calvin Jung), the lead henchman. Ando is slain by Hideo for this, and Murphy – who has joined him in his quest – opts to fight Hideo to defend his sensei. Murphy manages to defeat Hideo and win the day.