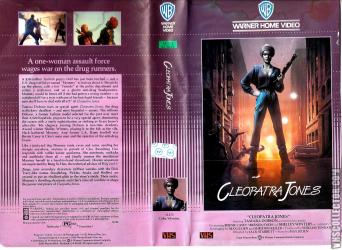 Additional Information
She's "Ten Miles of Bad Road" For Every Hood in Town!

Cleo teaches drug traffickers the meaning of saying no!

Tamara Dobson stars as Cleopatra Jones in Jack Starrett's blaxploitation programmer that, in its own way, deals effectively with the ravages of drugs in inner-city black communities. Cleopatra Jones is a jive female James Bond, a special drug agent for the United States government who wears sleek and hip clothes, drives a fancy car with a submachine-gun compartment in the front door, and travels all over the world to stomp out drugs at their source. Cleopatra has a loving relationship with Ruben (Bernie Casey), the well-meaning head of a drug rehabilitation clinic in Los Angeles. When Cleopatra travels to Turkey to oversee the destruction of poppy fields owned by Mommy (Shelley Winters) -- a lesbian drug dealer -- Mommy becomes upset. She exacts her revenge on Cleopatra by having the police close down Ruben's drug clinic. Nevertheless, Cleopatra continues to wreak havoc upon Mommy's drug business, and Mommy continues to try to do Cleopatra in, until finally there is a major confrontation between Cleopatra and Mommy and her minions.

The film opened to a favorable critical reception. Says Los Angeles film critic Kevin Thomas, Cleopatra Jones is “an exceptionally well-made black action picture…From start to finish this fast-moving Warner’s release is shrewdly calculated and affirms the gifts of its director Jack in bringing style and meaning to the exploitation picture. In her first starring role Miss Dobson more than makes up for her lack of acting experience by her dazzling looks, sultry personality, and unwavering poise.” [2]
Tapping into the Black Pride movement, the irony of using the name Cleopatra to convey a character who was strong physically, but equally feminine and independent, appealed to the urban public. As the queen of Egypt, Cleopatra’s role as a leader allowed African American women to identify with Dobson’s character and finally call a heroine their own.[2]
On the other hand, critics of the blaxploitation industry complained that they were “dismayed by Tamara’s image as a karate-chopping, pistol popping terror.” In response Dobson replied “You go through phases until you find the right situation where a character works for you. A lot of tits and ass movies were made, ballbuster films, exploitation pictures. But I don’t care what anybody calls it. Doing Cleopatra Jones gave me a chance to work. I loved Cleo. She was not only gracious, but strong, clever, intelligent and sexy.”[7]
The film was a box office success, grossing more than $100,000 in its first week of release, climbing to $400,000 by the fifth week


Cleopatra Jones was made by Warner Brothers following the success of the Shaft series and AIP’s films. It opened while the Black Power movement, second-wave feminism, and an increasingly growing black feminism were all prevalent.[4] This social environment created the desire for a black heroine who appealed to women through a combination of alluring femininity, macho strength and combat skill. The film depicts the harsh reality of the black ghetto but portrays a united community whose members help one another. The final scene where Jones, Reuben, and the other B&S members join together to defeat Mommy emphasizes a "coming together" of the black community against white supremacy.[4]
Although Cleopatra Jones contains themes relating to the black and feminist movements, it appeals to the general public and is known to be the “first blaxploitation film to use martial arts as part of its promotion.”[5] It appeals to audiences who enjoy action movies (such as the James Bond series) and has invited comparisons between Jones and Bond. One critic noted “On the surface, Cleopatra Jones is about a black distaff James Bond who drives a fancy car equipped with a submachine gun in the door, wears smart clothes, is a karate expert, and travels all over the world as a United States secret agent, destroying the poppy wherever it is found.”[2] Another critic, Chris Norton, even suggested, “Like Bond, Cleo is not a stealthy character who tries to infiltrate the underworld by losing her identity… Bond seldom tried to hide his identity, often using his real name during introductions, and all Bond films rely on his being recognized as 007.”[2] Likewise, Jones is rarely undercover, and is flashy and flamboyant on the job. Norton continues by saying “Cleo’s outrageous outfits are also analogous with Bond’s dinner jackets and playboy wardrobe. Her three-foot hat brims and flowing fur robes are treated with respect and awe within the film, just as Bond’s refinements are looked upon as the height of good taste… [However,] Cleo is not simply a black James Bond. While the Cleopatra Jones films have co-opted Bond, they avoid a total fusion of her character of Bond.”
Max Julien originally wrote the part of Jones for his then-girlfriend Vonetta McGee but the part was eventually given to Dobson,[2] a fashion model whose height inspired the film's tag line: “6 feet 2 inches of dynamite.”[4] Although blaxploitation films generally used sex to attract an audience, Cleopatra Jones was comparatively modest, containing no nudity or explicit sex.[5]
Just as her character Cleopatra Jones came from a poor, high-crime neighborhood, Dobson came from humble, working-class roots. She grew up in Baltimore’s inner city; her mother owned a beauty salon and her father worked at a railroad station. After earning a degree from the Baltimore Institute of Art, Dobson moved to New York City to become a model. Her race proved an obstacle until she caught the attention of movie producers searching for a black heroine.