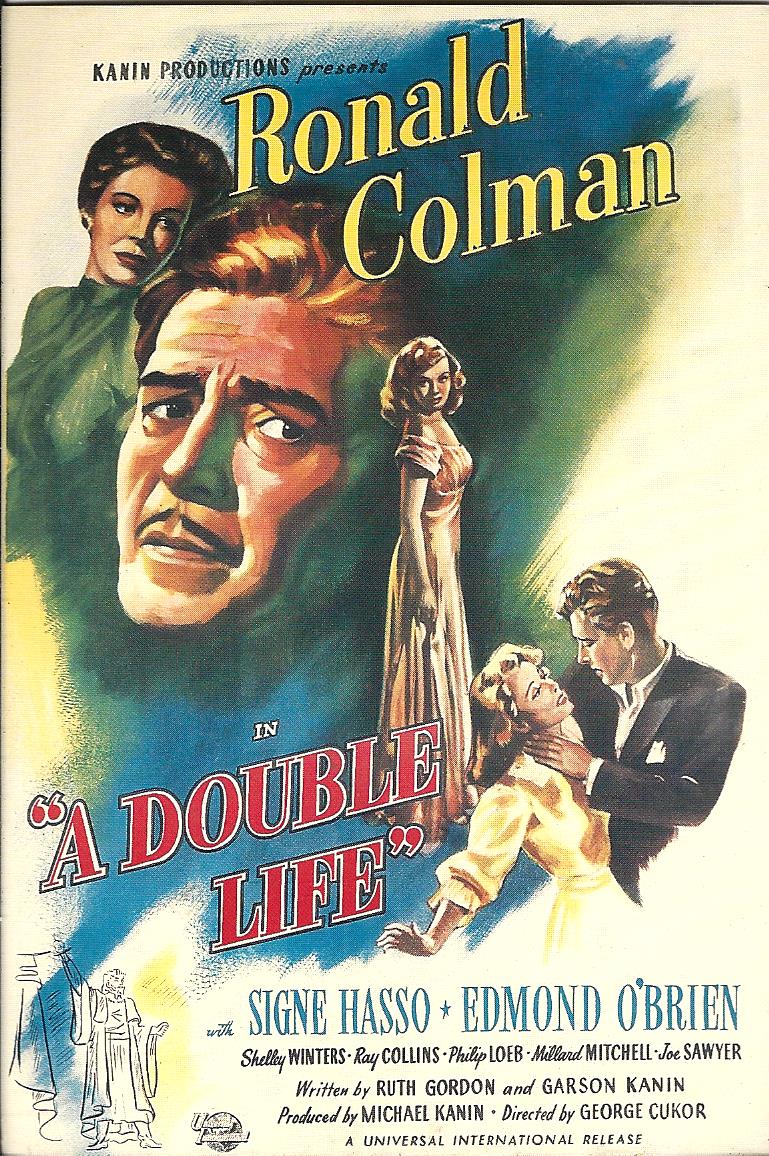 Additional Information
Ronald Colman won an Academy Award for his portrayal of an off-the-beam actor in A Double Life. A beloved stage star, Anthony John (Colman), has problems with his private life due to his unpredictable outbursts of temper. This trait has already cost him his wife, Brita (Signe Hasso), and threatens to sabotage his career. Nonetheless, Anthony makes his peace with Brita, and the two actors star in a new Broadway staging of Othello. The play is a hit, running over 300 performances, but the pressures of portraying a man moved to murder by jealousy takes its toll on Anthony. In a fit of delirium, he strangles his casual mistress, Pat (Shelley Winters), but retains no memory of the awful crime. Press agent Bill Friend (Edmond O'Brien), unaware that Anthony is the killer, uses Pat's murder as publicity for Othello. Anthony becomes enraged at this cheap ploy, and attacks Friend. At this point, Anthony realizes that he has been living "a double life" and is in fact Pat's murderer. A Double Life was written for the screen by Ruth Gordon and Garson Kanin, who occasionally digress from the melodramatic plotline to include a few backstage inside jokes.


When the film was released film critic Bosley Crowther lauded the film, writing, "We have it on the very good authority of Ruth Gordon and Garson Kanin, who should know—they being not only actors and playwrights but wife and spouse—that what seems a fairly safe profession, acting, is as dangerous as they come and love between people of the theatre is an adventure fraught with infinite perils. Especially is it risky when an actor takes his work seriously and goes in for playing "Othello." Then handkerchiefs and daggers rule his mind. At least, that is what is demonstrated in a rich, exciting, melodramatic way in the Kanin's own plushy production...George Cukor, in his direction, amply proves that he knows the theatre, its sights and sounds and brittle people."[3]
Critic Jerry Renshaw wrote, "A Double Life is an unusually intelligent, literate noir that is a classy departure from the pulpy "B" atmospherics often associated with the genre. Keep an eye out for Paddy Chayefsky and John Derek in minuscule bit parts