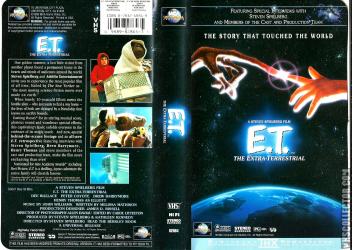 Additional Information
In a California forest, a group of alien botanists are collecting flora samples. As one finds one and begins to head back to the ship, a car with government agents appears on the scene. He tries to flee from them, only to arrive as the ship leaves. The scene shifts to a suburban home, where a 10-year-old boy named Elliott (Henry Thomas) is trying to hang out with his 16-year-old brother Michael (Robert MacNaughton) and his friends. As he returns from picking up a pizza, Elliott discovers that something is hiding in their tool shed. When he tells Michael and his friends, they go there, and don't find anything. However, after everybody is in bed at night, Elliott sneaks out to see if the thing was still there, but follows the footsteps into an old cornfield, and discovers a weird-looking creature. Both freaked out by each other, they run off screaming. Despite his family's disbelief, Elliott lures the alien from the forest to his bedroom using a trail of Reese's Pieces. (Mars corporation, the makers of M&M's, were originally approached to have M&M's used but they declined. Sales of Reese's Pieces skyrocketed after the film's release.) Before he goes to sleep, Elliott realizes the alien is imitating his movements. Elliott feigns illness the next morning to stay home from school and play with the alien. Later that day, Michael and their 5-year-old sister Gertie (Drew Berrymore) meet him. They decide to keep him hidden from their mother. When they ask it about his origin, he levitates several balls to represent the solar system and then demonstrates his powers by reviving a dead geranium.
At school the next day, Elliott begins to experience a psychic connection with the alien, including exhibiting signs of intoxication due to him drinking beer, and he begins freeing all the frogs in a biology class that they were about to dissect alive. As the alien watches John Wayne kiss Maureen O'Hara in The Quiet Man, Elliott kisses a girl he likes.


Makeshift communicator used by E.T. to phone home. Among its parts is a Speak and Spell, an umbrella lined with tinfoil, and a coffee can filled with other electronics.
The alien learns to speak English by repeating what Gertie says as she watches Sesame Street and, at Elliott's urging, dubs himself "E.T." He reads a comic strip where Buck Rogers, stranded, calls for help by building a makeshift communication device, and is inspired to try it himself. He gets Elliott's help in building one to "phone home" by using a Speak and Spell toy. Michael notices that E.T.'s health is declining, but Elliot denies this and he is beginning to refer to himself as "we".
On Halloween, Michael and Elliott dress E.T. as a ghost so they can sneak him out of the house, so that their mother can think that it's Gertie, who really sneaks off to the place where they are taking E.T. Elliott and E.T. ride the latter's bicycle to the forest, where E.T. makes a successful call home. The next morning, Elliott wakes up in the field, only to find E.T. gone, so he returns home to his distressed family. Michael searches for and finds E.T. dying in a ditch and takes him to Elliott, who is also dying. Their mother becomes frightened when she discovers Elliott's illness and the dying E.T., just as government agents invade the house. Scientists set up a medical facility there, quarantining Elliott and E.T. Their link disappears and E.T. then appears to die while Elliott recovers. A grief-stricken Elliott is left alone with the motionless E.T. when he notices a dead geranium, the plant E.T. had previously revived, coming back to life. E.T. reanimates and reveals that his people are returning. Elliott and Michael steal the van that E.T. had been loaded into and a chase ensues, with Michael's friends joining them as they attempt to evade the authorities by bicycle. Suddenly facing a dead end, they escape as E.T. uses telekinesis to lift them into the air and toward the forest.
Standing near his spaceship, E.T.'s heart glows as he prepares to return home. Mary, Gertie, and "Keys", a government agent, show up. E.T. says goodbye to Michael and Gertie, as the latter presents him with the geranium that he had revived. Before entering the spaceship, E.T. tells Elliott "I'll be right here", pointing his glowing finger to Elliott's forehead. He then picks up the geranium Gertie gave him, boards the spaceship, and it takes off, leaving a rainbow in the sky as Elliott (and the rest of them) watches it leave.

After his parents' divorce in 1960, Spielberg filled the void with an imaginary alien companion. Spielberg said that E.T. was "a friend who could be the brother I never had and a father that I didn't feel I had anymore."[11] During 1978, Spielberg announced he would shoot a film entitled Growing Up, which he would film in 28 days. The project was set aside because of delays on 1941, but the concept of making a small autobiographical film about childhood would stay with Spielberg.[8] He also thought about a follow-up to Close Encounters of the Third Kind, and began to develop a darker project he had planned with John Sayles called Night Skies in which malevolent aliens terrorize a family.[8]
Filming Raiders of the Lost Ark in Tunisia left Spielberg bored, and memories of his childhood creation resurfaced.[12] He told screenwriter Melissa Mathison about Night Skies, and developed a subplot from the failed project, in which Buddy, the only friendly alien, befriends an autistic child. Buddy's abandonment on Earth in the script's final scene inspired the E.T. concept.[12] Mathison wrote a first draft titled E.T. and Me in eight weeks,[12] which Spielberg considered perfect.[5] The script went through two more drafts, which deleted an "Eddie Haskell"-esque friend of Elliott. The chase sequence was also created, and Spielberg also suggested having the scene where E.T. got drunk.[8] Columbia Pictures, which had been producing Night Skies, met Spielberg to discuss the script. The studio passed on it, calling it "a wimpy Walt Disney movie", so Spielberg approached the more receptive Sid Sheinberg, president of MCA.[13]
Ed Verreaux created a $700,000 prototype for E.T., which Spielberg deemed useless.[8] Carlo Rambaldi, who designed the aliens for Close Encounters of the Third Kind, was hired to design the animatronics of E.T. Rambaldi's own painting Women of Delta led him to give the creature a unique, extendable neck.[5] The creature's face was inspired by the faces of Carl Sandburg, Albert Einstein and Ernest Hemingway.[14] Producer Kathleen Kennedy visited the Jules Stein Eye Institute to study real and glass eyeballs. She hired Institute staffers to create E.T.'s eyes, which she felt were particularly important in engaging the audience.[3] Four E.T. heads were created for filming, one as the main animatronic and the others for facial expressions, as well as a costume.[14] Two dwarfs, Tamara De Treaux and Pat Bilon,[8] as well as 12-year-old Matthew DeMeritt, who was born without legs,[15] took turns wearing the costume, depending on what scene was being filmed. DeMeritt actually walked on his hands and played all scenes where E.T. walked awkwardly or fell over. The head of the E.T. puppet was placed above the head of the actors, and the actors could see through slits in the puppet's chest.[5] Caprice Roth, a professional mime, filled prosthetics to play E.T.'s hands.[3] The puppet was created in three months at the cost of $1.5 million.[16] Spielberg declared it was "something that only a mother could love."[5] Mars, Incorporated found E.T. so ugly that the company refused to allow M&M's to be used in the film, believing the creature would frighten children. This allowed The Hershey Company the opportunity to market Reese's Pieces.[17] Science and technology educator Henry Feinberg created E.T.'s communicator device.