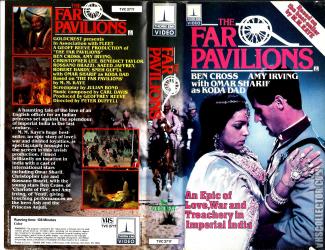 Additional Information
The 'Gone With The Wind' of the north-west frontier of India.


The lavishly produced three-part telemovie The Far Pavilions was adapted from the best-selling novel by M.M. Kaye. Set in colonial India during the second Afghan war, the film concerns the exploits of Ashton Pelham-Martyn (Ben Cross), a British officer. Born and raised in India, Pelham-Martyn finds himself a victim of his own divided loyalties as he leads a campaign against the rebellious tribal leaders on the northwestern frontier. The meat of the drama is Pelham-Martyn's "forbidden" romance with his lifelong friend, half-caste Hindu princess Anjuli (Amy Irving). The supporting cast includes the illustrious likes of Omar Sharif and Christopher Lee. Filmed on location on a budget of $12 million (the most costly made-for-cable movie up to 1984), The Far Pavilions originally aired over the HBO service on April 22, 23 and 24, 1984.


For HBO and Goldcrest, and first screened in 1984 in the UK, Peter Duffell directed a five-hour three-part television miniseries based on the novel, starring Ben Cross as Ashton, Amy Irving as Anjuli, Omar Sharif as Koda Dad and Christopher Lee as Kaka-ji Rao. It was HBO's first mini series.[2] The mini series ran 300 minutes,[3][4][5] and the parts were entitled "Return to India", "The Journey to Bhithor", and "Wally and Anjuli". (The current DVD release split each of these parts into two, creating 6 parts each of about 50 minutes, added a credit section at the newly created break in each part, and in addition removed the titlecard names of the original parts.) A theatrical edit of the series, entitled Blade of Steel,[citation needed] ran 140 minutes, cutting half the story. Although conventional in storytelling and photography, the mini series has ample production value (at a budget of $12 million it was the most expensive made-for-cable movie at the time)[6][7] and is faithful to the book, although cutting short the youth of Ashton before his return to India, and transposing the Afghan rebellion and Ash's rescue of Anjuli. Carl Davis composed the score, which is a much-sought collector's item. Much of the film was shot in the precincts of Samode Palace.[citation needed]
A 2005 stage musical adaptation was produced by Michael E. Ward, with music was composed by Philip Henderson. It premiered at the Shaftesbury Theatre in London's West End on 14 April 2005. The musical closed in September of the same year due to the sudden drop in audience numbers following the 7/7 London bombings. Budgeted at 7 million pounds, the show's cast featured Hadley Fraser as Ashton, Gayatri Iyer as Anjuli, Kulvinder Ghir as the Rana of Bhithor and Kabir Bedi as Kahn Sahib.
The book was adapted for radio drama on Britain's BBC Radio Four. It was broadcast in twenty 15-minute episodes between 31 January 2011 and 25 February 2011.