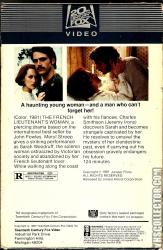 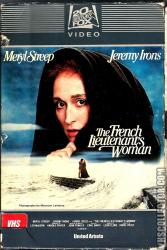 Additional Information
She was lost from the moment she saw him.

John Fowles' original novel The French Lieutenant's Woman was distinguished by a literary technique that involved telling a story of Victorian sexual and social oppression within the bounds of a 1970s viewpoint. How does one convey this time-frame dichotomy on film? The decision made by director Karel Reisz and Harold Pinter was to frame Fowles' basic plot within a "modern" context of their own making. While we watch as Sarah (Meryl Streep), a 19th-century Englishwoman ruined by an affair with a French lieutenant, enters into another disastrous relationship with principled young Charles (Jeremy Irons), we are constantly made aware that what we're seeing is only a film. This is done by surrounding the story with a modern narrative, focusing on a movie production company which is on location--filming The French Lieutenant's Woman. Meryl Streep doubles in the role of Sara and the American actress who plays her, while Jeremy Irons essays the dual role of Charles and the handsome Briton playing Charles. Likewise, everyone else in the cast is seen as "themselves" and as their French Lieutenant's Woman characters. Not surprisingly, the "real" Streep and Irons enter into an affair which closely parallels their characters' relationship. The commercial TV version of French Lieutenant's Woman eliminates 30 minutes' worth of "extraneous" scenes.

The French Lieutenant's Woman is a 1981 film directed by Karel Reisz and adapted by playwright Harold Pinter. It is based on the novel by John Fowles. The music score is by Carl Davis and the cinematography by Freddie Francis.

The film intercuts the stories of two affairs: one a Victorian period drama involving the gentleman palaeontologist Charles Smithson and the complex and troubled Sarah Woodruff, "The French Lieutenant's Woman"; the other between the actors "Mike" and "Anna", playing the lead roles in a modern filming of the story. In both segments, Jeremy Irons and Meryl Streep play the lead roles, but in line with John Fowles' source novel having multiple endings, the two otherwise parallel stories have different outcomes.

In the Victorian story, Charles enters into an intensely emotional relationship with Sarah, an enigmatic and self-inflicted outcast he meets while visiting his fiance Ernestina (Lynsey Baxter) in Lyme Regis. The two meet secretly in the Lyme Regis Undercliff, and eventually have sex in an Exeter hotel. This leads to Charles breaking off his engagement, but Sarah then disappears. In social disgrace after being sued for breach of promise, Charles searches for Sarah, fearing she has become a prostitute in London. After three years, Sarah, who has a job as a governess in the Lake District, contacts Charles to explain that she needed time to find herself. Despite Charles's initial anger, he forgives her, and the two are reconciled. They are finally seen boating on Lake Windermere.

In the modern story, the American actress Anna and the English actor Mike, both married, are shown as having an established affair during the making of the film. As filming concludes, although Mike wishes to continue the relationship, Anna becomes increasingly cool about the affair, and avoids Mike in favour of spending time with her French husband. During the film wrap party, Anna leaves without saying goodbye; Charles calls out to her from an upstairs window as she drives away, using her character name, Sarah.