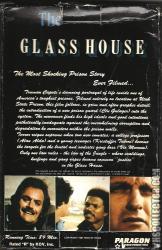 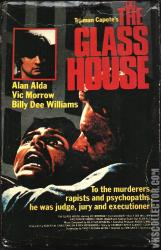 Catalog Number
NONE
-
Primary Distributor (If not listed, select "OTHER")
Paragon Video Productions

Additional Information
To the murderer's, rapists and psychopaths he was judge, jury and executioner!

The most brutal prison story ever made.


Adapted from a story by Truman Capote ("In Cold Blood"), the world of the prison convict is open to the viewer. As the story develops, one thing becomes clear. As in the outside world, there is a "system"; and just as on the outside, there is accommodation, honesty, cynicism, violence and all the other factors that make up our society. Three new convicts act as the catalyst for the events that follow; a college teacher, convicted of accidental manslaughter; a young man, sentenced for possession of marijuana; a new guard, interested in changing the system. Inside prison, the 'establlishment' presents itself. The warden doesn't want to rock the boat of the small society within prison walls. A convict dictator controls activities among the inmates thanks to a control of the narcotics traffic. A leader of the black convicts seethes in his own world of racial tension when there is no difference between convicts and authorities. As the film follows the three newcomers, it records the grim, terrifying, sometimes fascinating events that occur.

A group of new prisoners, including a political science professor, Jonathan Paige (Alan Alda), and a student, Allan Campbell (Kristoffer Tabori), arrive at a state prison, along with a new guard, Brian Courtland (Clu Gulager). Paige is a serving a year for manslaughter -- he accidentally killed a driver who had run down and injured his wife -- but his education doesn't prepare him for what he finds in prison. Nor does Courtland understand everything he sees in his new job, where he hopes to do some good. The warden (Dean Jagger) is spoken of as being on "short time," as though he were serving a sentence; the guard captain, Pagonis (G. Wood), is totally cynical about his work and his job; and one veteran guard, Brown (Roy Jenson), seems to be serving some of the prisoners -- and that small group of inmates have more to do with the running of the prison than does the administration. First among them is Hugo Slocum (Vic Morrow), a lifer who controls the flow of drugs and other contraband to the cons, wielding money and power without challenge until Paige gets assigned by the warden to the prison pharmacy, and -- thanks to his own sense of righteousness -- blocks Slocum's pipeline, a move that could get the professor killed. Meanwhile, Paige is trying to understand Lennox (Billy Dee Williams), the lifer he works with in the pharmacy, and discovers in him a true political visionary and leader, who lives the stuff that Paige has only ever lectured about. Lennox is black and proud, and a killer, and also (incidentally) smarter than Paige; he is also respected as a leader by the other blacks in the prison and feared just enough by the whites, including Slocum, to stay alive. Paige should only learn from him, but the professor is too set in his ways and too arrogant in his assumptions to do that. Complicating things further, Slocum has taken a decidedly physical liking to Paige's cellmate, Allan, a college student who is in on a marijuana charge and too naïve to recognize why the tough con is being so good to him until he rejects Slocum's advances. In retaliation, Allan is gang-raped on Slocum's orders, and later kills himself. Nor has Slocum forgotten about Paige or the pharmacy -- when Paige tries to reach out to another inmate, Sinclair (Edward Bell), who shows promise as a writer, Slocum destroys Sinclair's work and targets him, as well. Before he's killed, however, Sinclair reveals to Paige that, as Slocum's sometime bagman and former bookkeeper, he's recorded every transaction for the past eight years -- including every hit ordered by Slocum and how it was paid off, including the bribes to guards to look the other way -- and he passes the book with that record to the professor. It comes down to a do or die situation for Paige and Slocum, as each now has the power and the need to destroy the other to stay alive; the only question is whether Paige will figure out in time that he may have to back up his good intentions with lethal force.