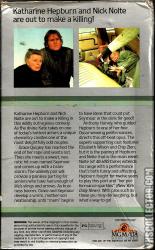 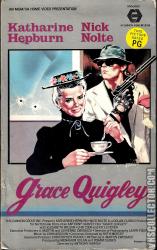 Additional Information
hey are business partners in a most unusual undertaking...Together, they're going to make a killing.


When first released as Grace Quigley, this odd little black comedy proved too fey and quirky even for the most devoted fans of Katharine Hepburn. The star plays the title character, an old, worn-out woman with nothing to live for. Accordingly, she hires professional assassin Seymour Flint (Nick Nolte) to kill her, albeit gently. As she ponders the prospect of a peaceful death as opposed to a miserable life, Grace convinces Seymour to murder not only herself, but all other poor souls who have grown tired of life. As it turns out, there are several people who'd be willing to pay for this "courtesy," and soon Grace and Seymour, together with his ditsy girlfriend Muriel (Kit Le Fever), are conducting a land-office business! Entered into competition at the 1984 Cannes Film Festival, Grace Quigley made no impression whatsoever. Screenwriter A. Martin Zweibeck withdrew the film, recut it to his satisfaction, and reissued it as The Ultimate Solution of Grace Quigley. Though this version was a marked improvement over the original, the film was still not quite the Harold and Maude-like "cult favorite" that everyone hoped it would be.

Grace Quigley, also titled The Ultimate Solution of Grace Quigley, is a 1985 film starring Katharine Hepburn and Nick Nolte. The plot centers around an elderly woman who decides not to wait around to die of old age, but hires a hit man to kill her. The film is noted for being Hepburn's last leading role in a movie for the big screen.
In addition to the version of the film that was released in 1985, at least two other versions are known to exist: the original cut, which premiered at the Cannes Film Festival in 1983, running 102 minutes; and the alternate version, The Ultimate Solution Of Grace Quigley, assembled by the writer, A. Martin Zweiback, running 94 minutes. The latter version is considered superior by some critics.