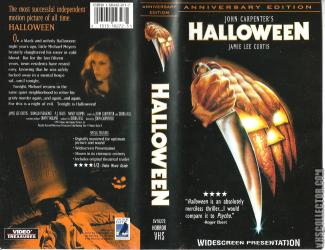 The Night he came home

The Night HE Came Home!

HE came home for HALLOWEEN.

Everyone is entitled to one good scare

Trick or treat... or die

The Trick Is To Stay Alive!


It was "The Night HE Came Home," warned the posters for John Carpenter's career-making horror smash. In Haddonfield, IL, on Halloween night 1963, six-year-old Michael Myers inexplicably slaughters his teenage sister. His psychiatrist Dr. Loomis (Donald Pleasence) can't penetrate Michael's psyche after years of institutionalization, but he knows that, when Myers escapes before Halloween in 1978, there is going to be hell to pay in Haddonfield. While Loomis heads to Haddonfield to alert police, Myers spots bookish teenager Laurie Strode (Jamie Lee Curtis) and follows her, constantly appearing and vanishing as Laurie and her looser friends Lynda (P.J. Soles) and Annie (Nancy Loomis) make their Halloween plans. By nightfall, the responsible Laurie is doing her own and Annie's babysitting jobs, while Annie and Lynda frolic in the parent-free house across the street. But Annie and Lynda are not answering the phone, and suspicious Laurie heads across the street to the darkened house to see what is going on..

Halloween is a 1978 American independent slasher horror film directed and scored by John Carpenter, co-written with producer Debra Hill, and starring Donald Pleasence and Jamie Lee Curtis in her film debut. The film was the first installment in what became the Halloween franchise. The plot is set in the fictional Midwestern town of Haddonfield, Illinois. On Halloween night in 1963, a six-year-old Michael Myers murders his older sister by stabbing her with a kitchen knife. Fifteen years later, he escapes from a psychiatric hospital, returns home, and stalks teenager Laurie Strode and her friends. Michael's psychiatrist Dr. Sam Loomis suspects Michael's intentions, and follows him to Haddonfield to try to prevent him from killing.
Halloween was produced on a budget of $325,000 and grossed $47 million at the box office in the United States,[1] and $70 million worldwide,[2] equivalent to nearly $240 million as of 2012, becoming one of the most profitable independent films.[1] Many critics credit the film as the first in a long line of slasher films inspired by Alfred Hitchcock's Psycho (1960). Halloween had many imitators and originated several clichés found in low-budget horror films of the 1980s and 1990s. Unlike many of its imitators, Halloween contains little graphic violence and gore.[3][4] In 2006, it was selected for preservation in the United States National Film Registry by the Library of Congress as being "culturally, historically, or aesthetically significant".[5]
Some critics have suggested that Halloween may encourage sadism and misogyny by identifying audiences with its villain.[6] Other critics have suggested the film is a social critique of the immorality of youth and teenagers in 1970s America, with many of Myers's victims being sexually promiscuous substance abusers,[7] while the lone heroine is depicted as innocent and pure hence her survival (however, the lone survivor is seen trying to smoke marijuana in one scene, but she didn't like it). Carpenter dismisses such analyses.[8][9] Several of Halloween's techniques and plot elements, although not founded in this film, have nonetheless become standard slasher movie tropes.

After viewing Carpenter's film Assault on Precinct 13 (1976) at the Milan Film Festival, independent film producer Irwin Yablans and financier Moustapha Akkad sought out Carpenter to direct a film for them about a psychotic killer that stalked babysitters.[10] In an interview with Fangoria magazine, Yablans stated, "I was thinking what would make sense in the horror genre, and what I wanted to do was make a picture that had the same impact as The Exorcist."[11] Carpenter and his then-girlfriend Debra Hill began drafting a story originally titled The Babysitter Murders, but, as Carpenter told Entertainment Weekly, Yablans suggested setting the movie on Halloween night and naming it Halloween instead.[12]
Akkad agreed to put up $300,000 for the film's budget, which was considered low at the time;[10] (Carpenter's previous film, Assault on Precinct 13, had an estimated budget of $100,000). Akkad worried over the tight, four-week schedule, low budget, and Carpenter's limited experience as a filmmaker, but told Fangoria, "Two things made me decide. One, Carpenter told me the story verbally and in a suspenseful way, almost frame for frame. Second, he told me he didn't want to take any fees, and that showed he had confidence in the project". Carpenter received $10,000 for directing, writing, and composing the music, retaining rights to 10 percent of the film's profits.[13]
Because of the low budget, wardrobe and props were often crafted from items on hand or that could be purchased inexpensively. Carpenter hired Tommy Lee Wallace as production designer, art director, location scout and co-editor. Wallace created the trademark mask worn by Michael Myers throughout the film from a Captain Kirk mask purchased for $1.98.[10] Carpenter recalled how Wallace "widened the eye holes and spray-painted the flesh a bluish white. In the script it said Michael Myers's mask had 'the pale features of a human face' and it truly was spooky looking. I can only imagine the result if they hadn't painted the mask white. Children would be checking their closet for William Shatner after Tommy got through with it."[12] Hill adds that the "idea was to make him almost humorless, faceless — this sort of pale visage that could resemble a human or not."[14] Many of the actors wore their own clothes, and Curtis' wardrobe was purchased at J. C. Penney for around a hundred dollars.[10]
The limited budget also dictated the filming location and time schedule. Halloween was filmed in 20 days in the spring of 1978 in South Pasadena, California and the cemetery at Sierra Madre, California. An abandoned house owned by a church stood in as the Myers house. Two homes on Orange Grove Avenue (near Sunset Boulevard) in Hollywood were used for the film's climax.[15] The crew had difficulty finding pumpkins in the spring, and artificial fall leaves had to be reused for multiple scenes. Local families dressed their children in Halloween costumes for trick-or-treat scenes.[10]
In August 2006, Fangoria reported that Synapse Films had discovered boxes of negatives containing footage cut from the film. One was labeled "1981" suggesting that it was additional footage for the television version of the film. Synapse owner Don May, Jr. said, "What we've got is pretty much all the unused original camera negative from Carpenter's original Halloween. Luckily, Billy [Kirkus] was able to find this material before it was destroyed. The story on how we got the negative is a long one, but we'll save it for when we're able to showcase the materials in some way. Kirkus should be commended for pretty much saving the Holy Grail of horror films."[16] It was later reported, "We just learned from Sean Clark, long time Halloween genius, that the footage found is just that: footage. There is no sound in any of the reels so far, since none of it was used in the final edit