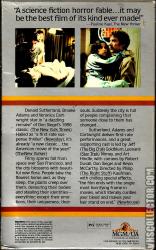 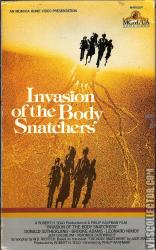 Invasion of the Body Snatchers

Additional Information
Get some sleep
Watch out! They get you while you're sleeping!
Sleep . . . Sleep . . . and be born again into a world without fear and hate!
On December 20th, try to stay awake
Pray for the human race...
You'll never close your eyes again.
From deep space...
The seed is planted...terror grows.


This remake of the 1956 horror classic Invasion of the Body Snatchers moves the action from small-town USA to 1970s San Francisco and replaces at least part of the original's psychological horror with special effects. Spores rain forth, unseen, from outer space, and soon strange flowers begin popping up all over the city. After bringing one of these hybrid specimens home with her one night, biologist Elizabeth Driscoll (Brooke Adams) notices that her live-in boyfriend, Geoffrey (Art Hindle), doesn't seem like himself; he's cold and distant and somehow just not quite there. When she turns to her friend Matthew Bennell (Donald Sutherland), a colleague at the Department of Public Health, he convinces her to see his friend Dr. Kibner (Leonard Nimoy), a pop psychologist who argues that the problem is all in Elizabeth's head. Soon, though, Matthew and Elizabeth begin to notice that people all over the city are changing subtly and inexplicably. When their friend Jack Bellicec (Jeff Goldblum) and his wife Nancy (Veronica Cartwright) find a lifeless, half-formed doppelganger covered with plant fibers in the mud baths they own and operate, the group of friends finally begins to understand that a sinister transformation is sweeping their city. Kevin McCarthy and Don Siegel, respectively the star and director of the original film, have small roles in the new version, as does an unbilled Robert Duvall.


Invasion of the Body Snatchers is a 1978 science fiction thriller[3] directed by Philip Kaufman, and starring Donald Sutherland, Brooke Adams, Veronica Cartwright and Leonard Nimoy. Released December 20, 1978, it is a remake of the 1956 film of the same name, which was based on the novel The Body Snatchers by Jack Finney. The plot involves a San Francisco health inspector and his colleague who discover that human beings are being substituted by aliens. The duplicates, who appear to be perfect copies of the persons replaced, but are devoid of any human emotion, attempt to install a tightly organised, conformist society.
A box office success, Invasion of the Body Snatchers was very well received by critics, and is considered by some to be among the greatest film remakes


Reviews for Invasion of the Body Snatchers have been nearly unanimously positive. It maintains a 95% approval rating on Rotten Tomatoes,[4] and is regarded as one of the best films of 1978,[8][9] as well as one of the greatest film remakes ever made.[10]
The New Yorker's Pauline Kael was a particular fan of the film, writing that it "may be the best film of its kind ever made".[11] Variety wrote that it "validates the entire concept of remakes. This new version of Don Siegel's 1956 cult classic not only matches the original in horrific tone and effect, but exceeds it in both conception and execution."[12] The New York Times' Janet Maslin wrote "The creepiness [Kauffman] generates is so crazily ubiquitous it becomes funny."[13]
The film was not without its criticism. Roger Ebert called Pauline Kael's praise for the movie "inexplicable",[14] while Time magazine's Richard Schickel labeled its screenplay "laughably literal".[15] Phil Hardy's Aurum Film Encyclopedia called Kaufman's direction "less sure" than the screenplay.[16]
The film received a nomination from the Writers Guild of America for Best Drama Adapted from Another Medium. The film was also nominated for the Hugo Award for Best Dramatic Presentation. It was also recognized by the Academy of Science Fiction, Fantasy and Horror Films. Philip Kaufman won Best Director, and the film was nominated Best Science Fiction Film. Donald Sutherland, Brooke Adams and Leonard Nimoy received additional nominations for their performances