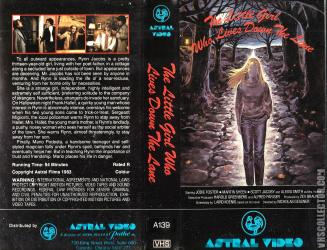 The Little Girl Who Lives Down the Lane

Catalog Number
A139
-
Primary Distributor (If not listed, select "OTHER")
Astral Video

Additional Information
The Little Girl Who Lives Down the Lane is a 1976 Canadian-French[1] film directed by Nicolas Gessner and starring Jodie Foster, Martin Sheen, Alexis Smith, Mort Shuman, and Scott Jacoby. It was written by Laird Koenig, based on Koenig's 1974 novel of the same title; Koenig also wrote a stage play based on his book. The plot focuses on thirteen-year-old Rynn Jacobs (Foster), a mysterious child whose dark secrets concerning her absent poet father are prodded by various nosy villagers in a small town on Long Island, NY. The film, though predominantly a dramatic thriller, also blends elements of horror, mystery, and romance.

In this Canadian thriller, Jodie Foster plays the title character, a reclusive, fiercely self-reliant teenager who lives alone in her father's house. When visitors call, Foster explains that her father is away on business. He's away, all right...far, far, away. And Foster, determined not to lose her independence, will go to any lengths to protect her secret, a fact that nosy neighbor Alexis Smith learns to her regret. A new danger to Foster's well-being looms in the form of pedophile Martin Sheen, who schemes to place the girl in a compromising position. Offering a helping hand to Foster is misfit teenager Mario (Scott Jacoby). Laird Koenig adapted his own novel to the screen.