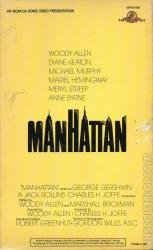 
Woody Allen combines witty dialogue, the music of George Gershwin, and atmospheric location shooting in one of his best romantic comedies. Isaac, a neurotic writer in his forties, is romantically involved with Tracy, a 17-year-old student. But things get complicated when he starts to date Mary, his best friend's ex-mistress.


The film received largely positive reviews and currently holds a rating of 98% "Certified Fresh" on Rotten Tomatoes.[22] Gary Arnold, in The Washington Post, wrote, "Manhattan has comic integrity in part because Allen is now making jokes at the expense of his own parochialism. There's no opportunity to heap condescending abuse on the phonies and sellouts decorating the Hollywood landscape. The result appears to be a more authentic and magnanimous comic perception of human vanity and foolhardiness".[23] In his review for Newsweek magazine, Jack Kroll wrote, "Allen's growth in every department is lovely to behold. He gets excellent performances from his cast. The increasing visual beauty of his films is part of their grace and sweetness, their balance between Allen's yearning romanticism and his tough eye for the fatuous and sentimental – a balance also expressed in his best screen play [sic] yet".[24] In his review for the Chicago Sun-Times, Roger Ebert, who gave the film three-and-a-half stars out of four, wrote, "Diane Keaton gives us a fresh and nicely edged New York intellectual. And Mariel Hemingway deserves some kind of special award for what's in some ways the most difficult role in the film."[25] Ebert includes the film in his list of The Great Movies.[26]

Alexander Walker of the London Evening Standard wrote, "So precisely nuanced is the speech, so subtle the behaviour of a group of friends, lovers, mistresses and cuckolds who keep splitting up and pairing off like unstable molecules".[27] Recently, J. Hoberman wrote in The Village Voice, "The New York City that Woody so tediously defended in Annie Hall was in crisis. And so he imagined an improved version. More than that, he cast this shining city in the form of those movies that he might have seen as a child in Coney Island—freeing the visions that he sensed to be locked up in the silver screen."[28]