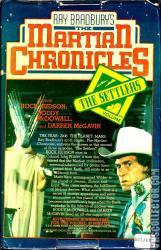 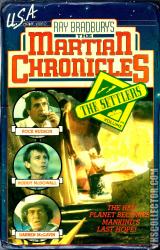 The Martian Chronicles: The Settlers Vol. 2

Additional Information
Episode 2 Summary : "The Settlers"[edit]
Wilder returns to the Red Planet in February 2004 with an entire fleet of spaceships, having been appointed director of the American colonization of Mars. By this time, all the Martians have been killed off by a strain of chickenpox. In six months, a dozen communities are laid down. They are named after the Zeus mission astronauts ("York Plain", "Blackville", "Wilder Mountain", "Spender Hill", "Briggs Canal" and "Lustig Creek"). The colonies grow rapidly over the next two years but not always successfully as the colonists bring the vices of Earth (graft, corruption, bureaucracy) with them.

In September 2006 the Martian colonists start to encounter strange phenomena. David Lustig, presumed dead six years ago, returns to his parents in Lustig Creek but for some reason he does not want to see other people in First Town (the main colony on Mars). A group of missionaries (Father Peregrine and Father Stone) are rescued from a landslide by a group of mysterious lights who claim to be the "Old Ones"; immortal non-corporeal Martians from over 250 million years ago who now live in the hills. Father Peregrine later sees a vision of Jesus Christ in his church in First Town, but the vision requests him to go away with words "I am not what I seem! I am not that vision!" Peregrine concludes that the vision in fact is a Martian who involuntarily looks like anybody other people have in mind: David Lustig, Jesus or anybody else. The Martian is trapped by the colonists and dies shortly afterwards. Meanwhile, nuclear war is imminent on Earth. Congress cuts the budget for space exploration, all flights to Mars are canceled and the colony is closed down.

In the final scene we again meet Parkhill, the only survivor (apart from Wilder) of the third Zeus mission. He has opened a hamburger bar on Mars with his wife, when a lone Martian walks in. He panics and kills him. Suddenly, numerous Martians appear in sand ships. Parkhill takes his wife to his very own sand ship and flees. The Martians catch up and give Parkhill a message: he now owns half of Mars. Unfortunately, the fleet of 10,000 rockets filled with 100,000 "hungry customers" won't be coming to patronize his restaurant, as the nuclear war has begun on Earth.