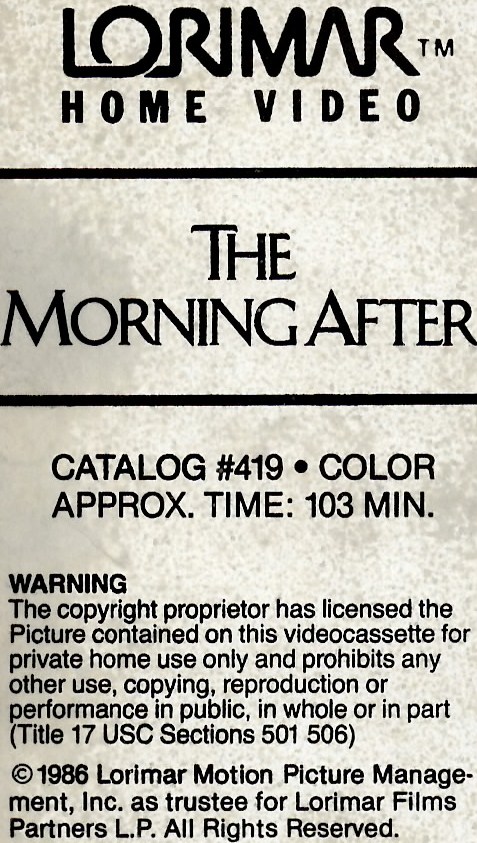 Additional Information
There aren't any trailers on this release.
Rated R
Closed Captioned

Last night she drank to forget. Today she woke up to a murder. Is he her last hope or the last man she should trust?


In this excellent thriller, crisply directed by Sidney Lumet, Alex Sternbergen (Jane Fonda), a washed-up, alcoholic actress who never quite made it, wakes up one morning in an unfamiliar, luxurious loft apartment, only to find the corpse of a stranger next to her in bed. Alex can remember nothing of the night before. In a panic, she tries to flee but is unable to get a flight out of Los Angeles, and short of cash, she hitches a ride with Turner Kendall (Jeff Bridges), a disabled former policeman who happens to be fixing his car in the airport parking lot. Alex tries to get rid of Turner and returns to the loft which she cleans in a futile attempt to get rid of her finger prints. Turner continues to take an unappreciated interest in Alex and keeps turning up unexpectedly, much to her annoyance. Finally, desperate and on the run, and never sure that she didn't commit the murder, Alex allows Turner to help her. Alex also confides in and is helped by her ex-husband and friend Joaquin Manero (Raul Julia), the only man she completely trusts. Despite Alex's suspicion of Turner, she slowly falls in love with him. The movie quickly moves to a surprising conclusion, and creates a good deal of suspense, particularly when Alex is confronted with a corpse that just won't stay put. The highlight of the film is the performance by Jane Fonda reminiscent of her magnificent performance as Bree Daniels in Klute. The Morning After never rises to the quality of Klute, but Fonda's performance was strong enough to earn her an Oscar nomination.

The Morning After is a 1986 mystery film starring Jane Fonda, Jeff Bridges and Raul Julia. The movie was written by James Hicks and David Rayfiel (uncredited). It was directed by Sidney Lumet. It was nominated for the Academy Award for Best Actress (Jane Fonda). Kathy Bates has a small cameo as a bystander.