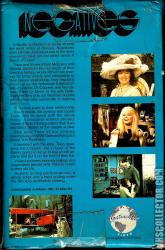 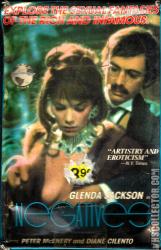 Additional Information
Theo and Vivien, an unmarried couple, live above an antique store owned by Theo's father, who is slowly dying of cancer in a nearby hospital. The two can function sexually only by acting out a fantasy in which Theo becomes turn-of-the-century wife murderer Dr. Crippen, and Vivien alternately assumes the roles of Crippen's wife, Belle, and his mistress, Ethel. One day an attractive German photographer, Reingard, witnesses the couple, dressed in their Edwardian costumes and acting out their fantasy. Fascinated with the game, Reingard photographs the action, and she soon moves in as a lodger. While Vivien enjoys the Crippen drama, Theo finds his part humiliating. Reingard convinces him that he looks like World War I ace pilot Baron Manfred von Richthofen, and he assumes the role totally, burning the Crippen clothes when his father dies. Vivien becomes jealous of Theo's solitary fantasy and tries to destroy the plane that he has installed on the roof-garden; but Theo beats her unmercifully, and she is taken to the hospital. Reingard decides that the situation has gotten out of hand and leaves Theo in his plane, embroiled in an imaginary battle. He is last seen slumped in the plane with blood trickling from his mouth.

An unmarried London couple tries to interject some life into their romantic pursuits in this uneven mystery. Theo (Peter McEnery) and Vivien (Glenda Jackson) take over the used furniture store owned by Theo's father, who is dying of cancer. Reingard (Diane Cliento) is the German neighbor who produces a photograph of World War I flying ace the Red Baron, who bears an uncanny resemblance to Theo. The couple then takes delight in enacting elaborate fantasies in which Theo is first the notorious turn-of-the century killer, Dr. Crippen and then the Red Baron. Things take a deadly turn when the couple invite a photographer in to film them. Theo goes so far as to buy a vintage airplane to put on the roof of his home. Vivien wishes to participate in the fantasy, but Theo becomes violent. ~