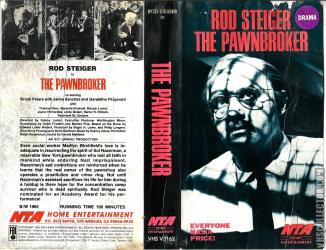 Additional Information
The Most Talked About Picture!

Critically acclaimed Rod Steiger plays Sol Nazerman, a Jewish pawnbroker who survived imprisonment in a Nazi concentration camp, even though his wife and family did not. The devastating experience and unrelenting memories inhibit Sol from emotional involvement with life. He has no faith in religion and less in mankind. Though he carries on an affair with a woman who was also a victim of the Nazi camps, it is without emotion and Sol grows increasingly bitter and callous, withdrawing still further from the world around him. As his small shop in Harlem is run with little care or attention, it becomes a convenient cover for a local racketeer. Finally, a caring social worker tries to appeal to his humanity, but Sol's emotional wounds may prove to be too great to overcome. Based on a book by Edward Lewis Wallant, The Pawnbroker features the skilled camera work of Boris Kaufman, who had previously worked with director Sidney Lumet on films such as 12 Angry Men (1957) and Long Day's Journey Into Night (1962). The score is composed by Quincy Jones, who would contribute to Lumet's 1978 musical, The Wiz. ~


The Pawnbroker is a 1964 drama film, directed by Sidney Lumet, starring Rod Steiger, Geraldine Fitzgerald, Brock Peters, Jaime Sánchez and Morgan Freeman in his feature film debut. It was adapted by Morton S. Fine and David Friedkin from the novel of the same name by Edward Lewis Wallant.

The film was the first American movie to deal with the Jewish holocaust from the viewpoint of a survivor.[2] It earned international acclaim for Steiger, launching his career as an A-list actor,[3] and was among the first American movies to feature nudity during the Production Code and was the first film featuring bare breasts to receive Production Code approval. Although it was publicly announced to be a special exception, the controversy proved to be first of similar major challenges to the Code that ultimately led to its abandonment.[4]

In 2008, The Pawnbroker was selected for preservation in the United States National Film Registry by the Library of Congress as being "culturally, historically, or aesthetically significant".

With the rise of Hitler, Sol Nazerman (Steiger), a German-Jewish university professor, was dragged to a concentration camp along with his family. He saw his two children die (one while riding in a cattle car) and his wife raped by Nazi officers in the camp. Now he operates a pawnshop in East Harlem, while living in an anonymous Bronx high-rise apartment. Numbed by his experiences, he has worked hard not to experience emotions.[5] Nazerman is bitter and alienated, viewing the people around him as "rejects, scum."[6] He is shown interacting cynically as he bargains with the many desperate characters pawning their goods.

Nazerman is idolized by a young Puerto Rican, Jesus Ortiz (Sánchez), who works for Nazerman as his shop assistant, but the youth's friendship is rebuffed, as are the overtures of Marilyn Birchfield (Fitzgerald), a neighborhood social worker.[5]

Nazerman learns that Rodriguez (Peters), a racketeer who uses the pawnshop as a front, makes his money through prostitution. Nazerman recalls his wife's degradation and wants no part of it. This results in a clash with Rodriguez, who threatens to kill Nazerman. Meanwhile Ortiz, his feelings hurt when Nazerman says that Ortiz means nothing to him, spitefully arranges for the pawnshop to be robbed by a neighborhood gang. During the robbery, Nazerman refuses to hand over his money. Ortiz takes the gang member's bullet intended for Nazerman and dies in Nazerman's arms in the street.[5]

The film, and Steiger's performance in particular, was greeted by widespread critical acclaim.[4] Life magazine praised Steiger's "endless versatility." Brendan Gill wrote in The New Yorker: "By a magic more mysterious. . . than his always clever makeup, he manages to convince me at once that he is whoever he pretends to be."[7]

New York Times critic Bosley Crowther called it a "remarkable picture" that was "a dark and haunting drama of a man who has reasonably eschewed a role of involvement and compassion in a brutal and bitter world and has found his life barren and rootless as a consequence. It is further a drama of discovery of the need of man to try to do something for his fellow human sufferers in the troubled world of today." He praised the performances in the film, including the supporting cast.[6]

One negative review came from Pauline Kael, who called it "trite", but said: "You can see the big pushes for powerful effects, yet it isn't negligible. It wrenches audiences, making them fear that they, too, could become like this man. And when events strip off his armor, he doesn't discover a new, warm humanity, he discovers sharper suffering - just what his armor had protected him from. Most of the intensity comes from Steiger's performance."[3]