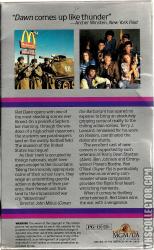 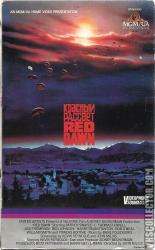 . . . . A Gang of high-school kids become the last line of defence.

In our time, no foreign army has ever occupied American soil. Until now.
The invading armies planned for everything - except for eight kids called "The Wolverines."


Red Dawn is a 1984 American war film directed by John Milius and co-written by Milius and Kevin Reynolds. It stars Patrick Swayze, C. Thomas Howell, Lea Thompson, Charlie Sheen, and Jennifer Grey. It was the first film to be released with the MPAA rating of PG-13.[2]
The film is set in an alternate 1980s in which the United States is invaded by the Soviet Union and its Cuban and Nicaraguan allies.[3] However, the onset of World War III is in the background and not fully elaborated. The story follows a group of American high school students who resist the occupation with guerrilla warfare, calling themselves Wolverines, after their high school mascot.

Red Dawn was the 20th highest grossing film of 1984, opening on 10 August 1984 in 1,822 theatres and taking in $8,230,381 on its first weekend. Its box office gross is $38,376,497.[1] It was the first film to be released in the US with a Motion Picture Association of America PG-13 rating.[4]
Red Dawn received mixed reviews, receiving a score of 53% on Rotten Tomatoes.[6]
At the time it was released, Red Dawn was considered the most violent film by the Guinness Book of Records and The National Coalition on Television Violence, with a rate of 134 acts of violence per hour, or 2.23 per minute.[7] The DVD Special Edition (2007) includes an on-screen "Carnage Counter" in a nod to this.[8]
National Review Online has named the film #15 in its list of "The Best Conservative Movies."[9]
Adam Arseneau at the website DVD Verdict opined that the film "often feels like a Republican wet dream manifested into a surrealistic Orwellian nightmare".[8]
According to Jesse Walker of Reason:
The film outraged liberal critics, but further to the left it had some supporters. In a witty and perceptive piece for The Nation, Andrew Kopkind called it "the most convincing story about popular resistance to imperial oppression since the inimitable Battle of Algiers," adding that he'd "take the Wolverines from Colorado over a small circle of friends from Harvard Square in any revolutionary situation I can imagine."[10]
Libertarian theorist Murray Rothbard argued that the film was "not so much pro-war as it is anti-State."[11] Rothbard gave the film a generally positive review, while expressing some reservations with the story:
One big problem with the picture is that there is no sense that successful guerrilla war feeds on itself; in real life the ranks of the guerrillas would start to swell, and this would defeat the search-and-destroy concept. In Red Dawn, on the other hand, there are only the same half-dozen teenagers, and the inevitable attrition makes the struggle seem hopeless when it need not be. Another problem is that there is no character development through action, so that, except for the leader, all the high school kids seem indistinguishable. As a result, there is no impulse to mourn as each one falls by the wayside.


Set at an indeterminate point in the future, this drama with an overt anti-communist message begins as an ostensible war movie: Russian and Cuban forces have invaded the U.S. and are viciously eliminating the inhabitants of a small town, when a group of teens escapes and plans a counterattack. Jed (Patrick Swayze), Robert (C. Thomas Howell), and six of their friends watch in amazement as soldiers parachute into their town and start shooting. The teens grab a pickup truck, stock up on supplies at the local store, and head for the hills. Meanwhile, the men in the town -- after a minimal resistance -- are rounded up and held at a drive-in theater converted into a concentration camp. The sadistic Soviet military then make them watch acclaimed Russian director Sergei Eisenstein's 1938 classic Alexander Nevsky, as their punishing rehabilitation begins. Meanwhile, after minimal resistance from the adults, a Cuban, Bella (Ron O'Neal), is put in charge and is not certain how he can really defeat the teen army. The Soviets and Cubans have so far defeated the American Army, Navy, Marines, and Air Force, but these teens are really something else. After a successful ambush, the teen guerrillas gear up for future forays, when they are suddenly betrayed by one of their number and by doubts about the morality of what they are doing. Red Dawn is noteworthy for being the first movie released with the PG-13 rating, created by the MPAA after public outcry over violent content in the PG-rated Indiana Jones and the Temple of Doom and Gremlins.